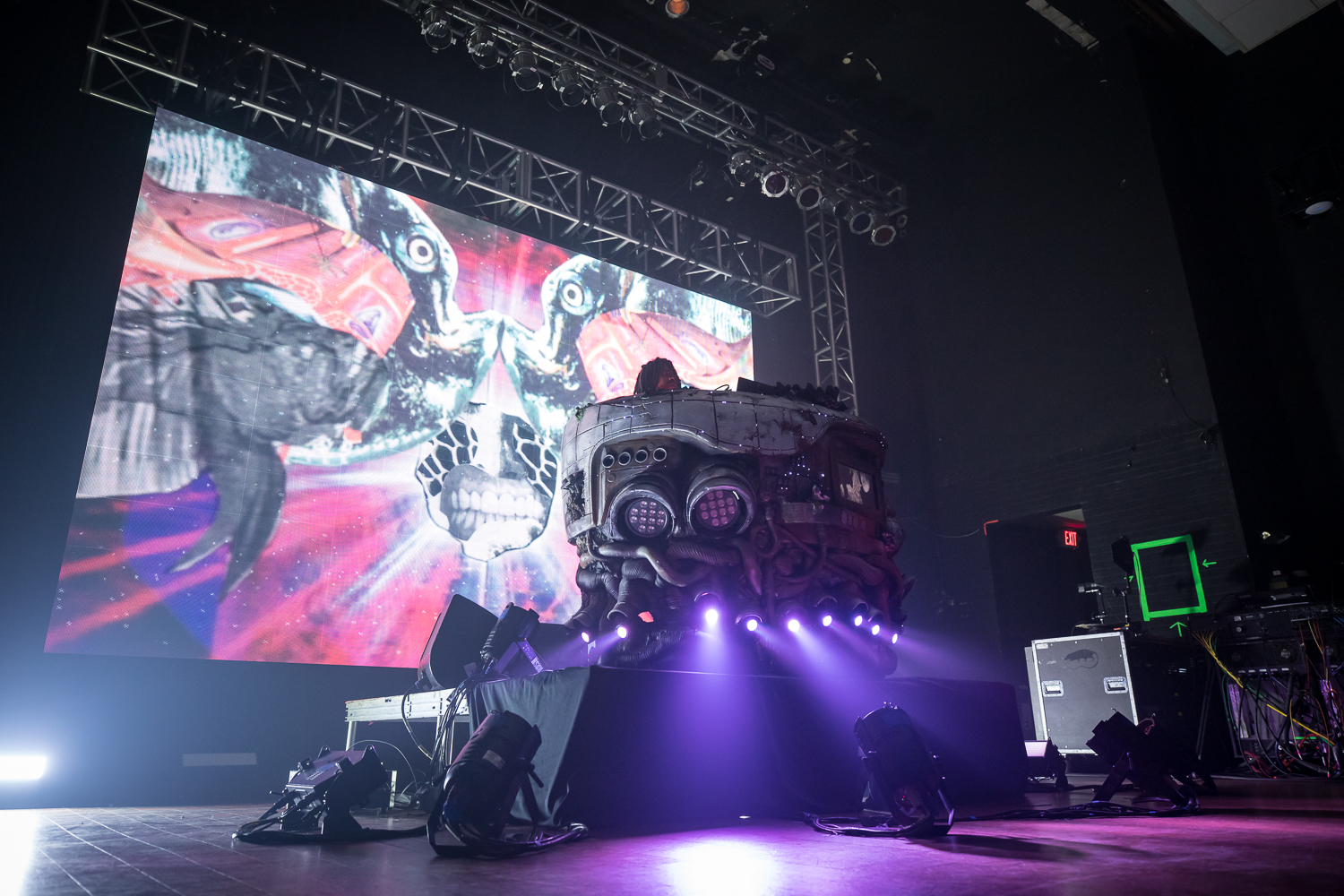 Kentucky and her northern neighbor showed up to welcome Flying Lotus, the Warp Records deejay, the rapper sometimes known as Captain Murphy, IDM record producer Steven Ellison. An enigma with his finger on the pulse. His music runs the gamut. His pace is frenetic. His collaborators, well-known. Radiohead, Anderson .Paak, Thundercat, Erykah Badu, Herbie Hancock, George Clinton, Kendrick Lamar—just a few who have borrowed or lent a hand. Alice and John Coltrane are in his bloodline. That’s one hell of a pedigree. The crowd in Madison Theater mirrors this multiplicity in a surprisingly wide array of ages and subcultures. Denim, capris, fishnets, cargo shorts in no small order. Tie dye mingling with leather and jerseys, everyone rocking the red 3-D glasses distributed at the door. All heads bobbing to the endearing sound of Salami Rose Joe Louis, standing in a field of gear, softly singing to the looped, barren beats while her piano takes on the sound of what I imagine a 1920s cartoon about jazz in space would sound like.

Next out is a trio led by Brandon Coleman, perched on the lip of the stage juggling keyboards, keytars, stomp boxes, and vocoders. His ability to quarter himself and perform four simultaneous tasks amazes me. The astral sound slides through jazz and funk and soul, the appropriately monikered Madd Galaxy and Tech Dizzle backing on trumpet and drums, respectively. DJ PBDY fills in the silence between setups and teardowns. Kicking off the show with a bizarre video starring David Lynch in a wolf costume delivering his lines from “Fire Is Coming” off the album Flamagra, FlyLo rises from the now barren, smoke-filled stage to preside over a pulpit of space junk as if Wall-E was let loose on the set of The Running Man. Embedded lights shoot outward, floor lights fighting back blast through the fog. The stage is backed by an LED curtain, flashing anime, futuristic scenes that could be Dune in Egypt, symbols of secret societies, lightning, lava hellscapes, all streaming out past the silhouette of Flying Lotus in three dimensions. He’s taken a form of music lambasted for its more traditional look of hoodie-clad obscurity slumped over a laptop and made it into pure spectacle.

The sound is not easy to pin down. It’s the kryptonite of a music industry that likes to box up its genres by market and station. Glitched-out beats will give way to psychedelic cinematics, get run over by lyrics, to end up bouncing funkadelic. You can pick out the folks that joined in at the studio, none more prevalent than the West Coast Get Down gang. They are an ever-rotating horde of uber-talented young musicians that are doing everything right, each backing the other’s play when it’s time to place their name on the cover or the marquee. Their avant soul jazz glues the broken loops and beats together.

There’s plenty in there to have the old folks scratching their heads, spouting monologues about music these days. Flying Lotus has a heavy foot in the past and the traditional. He was born into jazz royalty and surrounds himself with the new guard. He can spit and remix, strum and sample. It’s organically derived and electronically delivered. FlyLo is a one-man band who can turn a genre better known for dark warehouses and make it into an immersive art experience. This is what music looks like, past-nodding and forward-looking.