On the last Friday of June, Summer finally announced itself in pure Cincinnati fashion. After an unseasonably mild start, it came screaming, all heat, all humidity, no breeze. Swimming down Spring Grove, it only took two steps in to feel the wall of repulsion hit me. At least 170F with no air flow, all body vapor, hanging in the air, dripping off everything. You could taste it. I’ve never seen this many people here. Northside Yacht Club is at capacity. 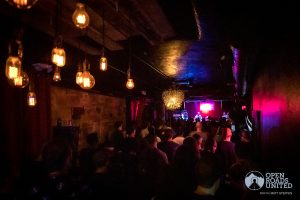 Between bands I was able to push my way to the front and take the lone spot that I could squeeze myself into. Normally dead center is not the best way to go for photography, but Pelican has no use for mic stands, so I could make it work. With more of a small riser than a stage, as the crowd filled in and pushed up behind me, I was one small claustrophobic reaction from joining Larry on the drum kit. They thanked everyone for coming out, admitting they underestimated their draw. It’s been a few years since Pelican has played this area, taking some time off for work and children and life. Thankfully, Cincinnati hasn’t forgotten them.

I’ve always lumped Pelican into that post-rock, post-whatever, cinematic scene that exploded a decade or so ago. On the shelf with The Appleseed Cast, Caspian, maybe even Godspeed! You Black Emperor, the quiet-loud-quiet formula but Pelican replaces the quiet sections with even louder ones. They are able to bring in chiggas and that detuned slog rock cadence and whip it into an atmospheric landscape. A standard four piece with an eight piece worth of stompboxes, Pelican layers riff on riff, building up to towering mountains of sound before dissecting back down to their basic parts. Live and instrumental, it’s not an easy task keeping a crowd’s excitement, but just when you’re spaced out on the ethereal loops the crunching melody cuts through just when it needs to, snapping you back into attention. 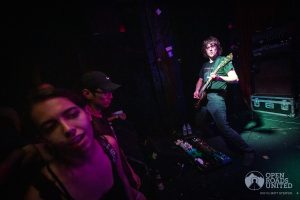 Touring to support their recent release, Nighttime Stories, their first record in six years, Pelican sounds like they are grappling with all the trappings that kept them from releasing this album earlier. The work and children and life parts, and all the existential, what am I doing, balancing dreams and needs of others, struggling with your own mortality things that comes with them. Now separated by two-thirds of a country, they work their magic through cloud storage. It took a little longer to get there, but what came out of it hits with a surprising sense of urgency. On earlier albums when Pelican was content with letting the point evolve at it’s own pace, these new tracks are more directed. The rhythms are a little sharper, the guitars duel for their space. There are still lulling waves of melancholy and wander, but they seem to be moving a bit more intently, edged by crushing, aggressive power chords.

Pelican is music you must see live to get the full effect. Even in a jam packed, Cincinnati hot house, they were fully engaging. Perhaps aided by the heat stroke, or the 72 pounds I lost in water weight, I felt lucky to be there.