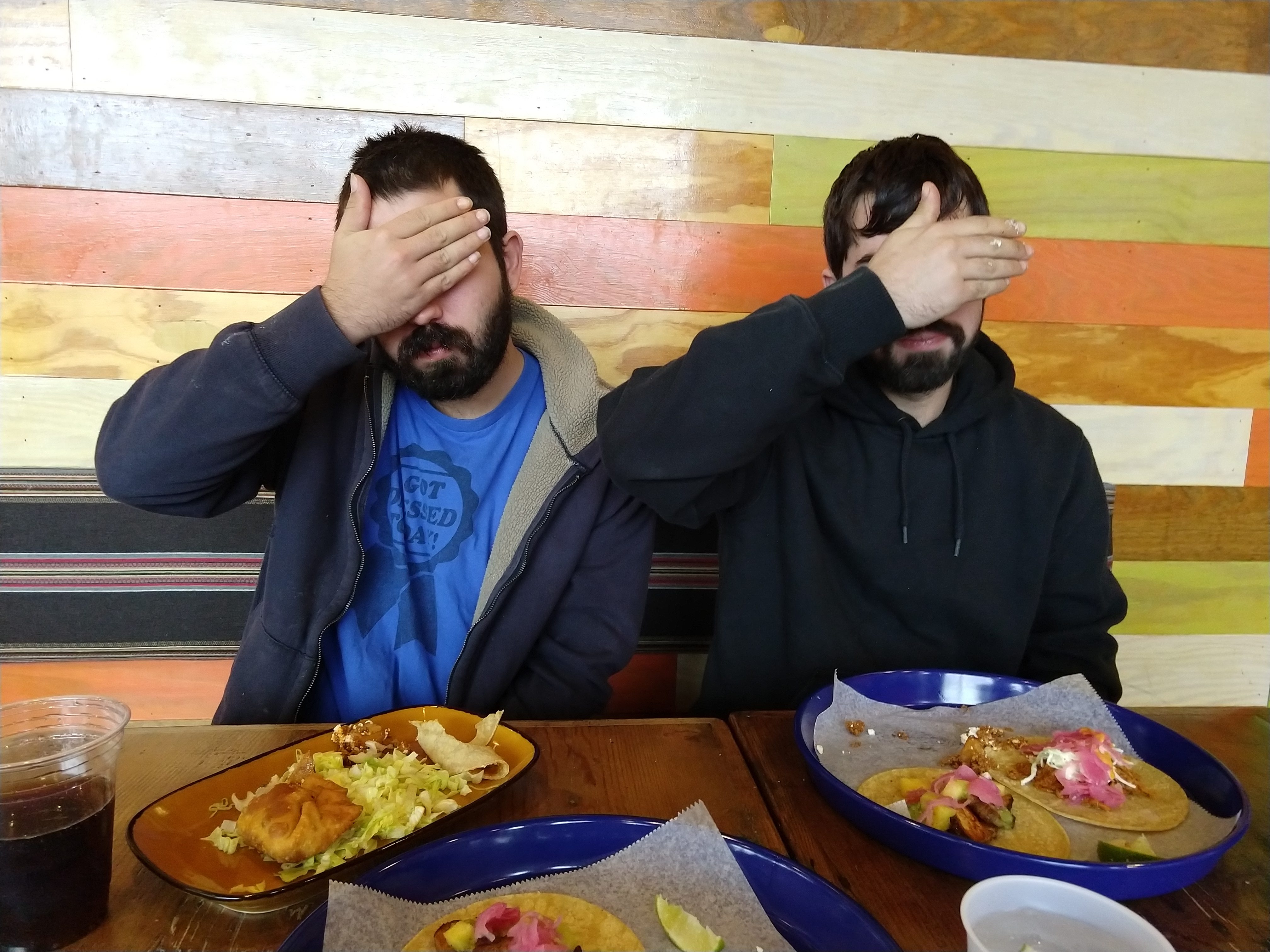 The National Institute of Mental Illness (NIMH) reports that “in the United States, an estimated 11.5 million adults suffer from a seriously disabling mental illness, such as schizophrenia, bipolar disorder, and major depression.

Based on estimates for 2010, mental disorders accounted for 21.3 percent of all years lived with disability in the United States. Among the top 20 causes of years lived with disability, five were mental disorders: major depressive disorder (8.3 percent of the total), anxiety disorders (5.1 percent), schizophrenia (2.2 percent), bipolar disorder (1.6 percent) and dysthymia (1.5 percent).”

We hit, some time ago the genetic lottery and my twins sons live with schizophrenia. Their journey- our families journey- has been a long and hard one. We’ve actively fought the disease, in all it’s various forms for about ten years. It’s hard to say when the disease begins. Most say it never ends, there is no cure. 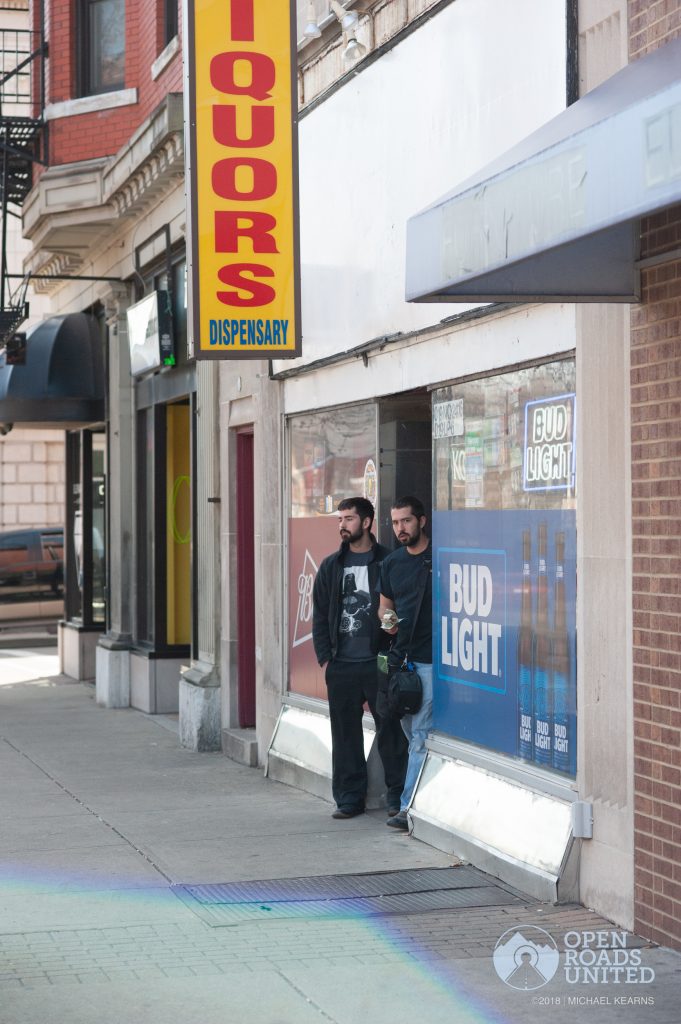 It’s a strange disease in that the symptoms reveal themselves long before diagnosis. All too often the teenager afflicted with the disease presents not so much as sick as troubled, if not outright belligerent.

The fact that many schizophrenics don’t fully present or suffer a true episode of psychosis (known as a first break) means that for years prior to an actual accurate diagnosis, schizophrenics are often misunderstood and misdiagnosed and seen as, and often treated as miscreants, trouble makers and/or juvenile delinquents.

They’re misunderstood, ignored at school, bullied throughout their life and the subject of scorn from people who simply assume that they are acting as willful assholes. Most never even begin to suspect that these kids are living a daily life which in which they are tortured by visions- who sometimes command them to do horrible acts to themselves, their families or friends.

Once finally diagnosed, after years of chaos,  and proper treatment with caring professionals and the proper administration of anti-psychotics meds the twins began the long road back to something like normal. Even under the best of circumstances, however, it’s never an easy road.

And while my sons have largely walked that road, they are not cured and are unlikely to be cured,  though they have been very lucky to have their care overseen by very talented professionals. Things have gone about as well as they can. They are, today, about 80% better. 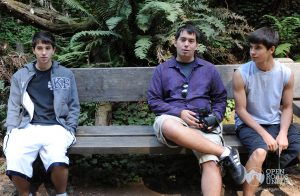 Jacob and Matt (far left) with their older brother in Glacier Nat’l Park circa 2015.

Which leaves them in a fortunate but strange place as much of the ready research and literature is heavily concerned with the early phases of treatment.

We haven’t received a lot of advice as to how to get our sons from 80 to 100% recovered. We now find ourselves creating therapy and treatment with the hope of moving toward total recovery. Without a lot of guidance, we are making it up as we go along.

Enter the Taco Hunters. Because the last ten years have been very unfun for both of my sons and their parents (and we are there care givers 99.5% of the time) I have been determined to make ongoing therapy as fun as possible while concurrently teaching the twins practical skills.

One such therapy is daily dinner. Almost every night I make dinner, from scratch, with the twins serving as my sous chefs- or prep team.  They cut onions and garlic, learn to use knives properly and make simple sauces. They have their own specialties.

Jacob makes a mean guacamole- properly prepared in the mortal and pestle- while Matt creates a mean, if not distinctly suburban, tuna noodle casserole.

This daily ritual teaches them coordination, dexterity and important life skills. Cooking from scratch also serves to ensure that we eat healthy.

If there’s a hockey game on after dinner, we all gather in the living room and watch the Penguins or Blue Jackets. Our family is the very picture of suburban domestic bliss, yet none of it is boring given that none of us, until very recently, have ever experienced any form of domestic bliss. 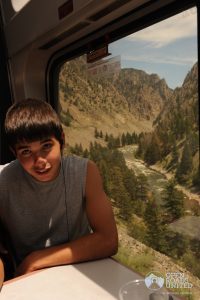 Jacob on train through the Rockies.

And while these activities are both welcomed and helpful for everyone, our daily home rituals do not serve to address several of the larger remaining deficits suffered by our sons. To be specific, the last decade have left our sons woefully incapable of socializing, and/or engaging in  many of the most superficial of social functions.

Mathew tends to be painfully shy, does not like to be in large crowds, or for that matter small gatherings and has problems interacting with strangers. He often has problems communicating because he tends to speak in whispers. He also struggles in applying critical thinking skills and completing tasks.

To be clear he is a smart kid- our oldest son Nate- who holds an aerospace degree from Auburn has long sworn that Matt is the smart one in the family (in truth I am) and that he (Matt) is destined one day to run a third world country and or rip off the stock exchange for millions….

Jacob’s remaining deficiencies tend to lie in the other direction. He tends toward mania in social situation and sees every social outing as an excuse to indulge to excess.

Taking Jacob anywhere often means that I’ll be skipping any personal relaxation and will be, instead, babysitting. In the years before he was diagnosed Jacob ran up a pretty impress rap sheet centering around drinking, toking and pugilism. All of this is complicated by the fact that Jacob is a poor and belligerent drunk.

For all of these reasons I have decided that the twins and I will be undertaking the task of finding the best tacos in Cincinnati.  I hope this hunt will serve to teach them any number of solid practical skills: the value of money, gaining confidence in common social interactions, navigation skills as we hunt throughout the lesser know neighborhoods of our town for hidden taquerias, as well as learning some small amount of social etiquette.

Plus I really dig tacos and Mexican food as a whole. 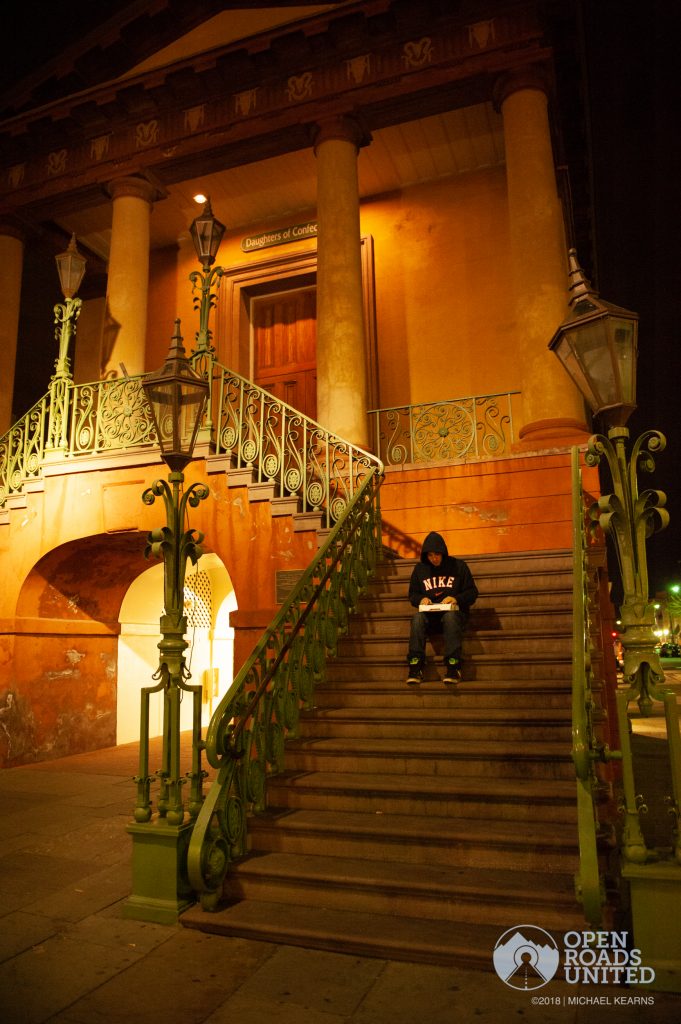 Mexican food, like my sons, has greatly improved over the last ten years in Cincinnati. Barely more than a decade ago, Mexican food- or some sick bastardization of same, was limited almost exclusively to large national chains such as Don Pablo’s and/or Chi Chi’s.

These south of the border vomitoriums did not sell real Mexican food any more than KFC sold respectable southern food.

There has been, however, an explosion- in the last decade- in both Latino population and cuisine. We culinary challenged mid westerners have come to know that tacos are made with soft corn tortillas (not wheat, let alone preformed U shaped shells of undetermined origin having the consistency of pine cones), seasoned meat (sometimes from exotic meat such as goat and cow tongue and not ground beef seasoned from an envelope), peppers and fresh cilantro and onions (and not iceberg lettuce and tasteless tomato).

We came to understand the glory of fresh guacamole and chorizo sausage; real margaritas. 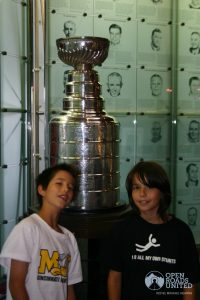 Matt and Jacob in Toronto at the Hockey Hall of Fame w/ Lord Stanley’s Cup.

Large and nearly authentic Mexican restaurants have given way to small taquerias hidden in lesser known neighborhoods and strip malls.

The first several years of the taqueria influx around here was heaven as the patrons were almost all Latino, often construction workers. The waitresses  and counter help rarely spoke English. It was also possible to believe that one had traveled outside the confines of my small minded conservative city and had landed, if only for an hour, in some strange new land in which was spoken a new and very welcomed culinary language.

Such novel thrills dissipated in short order, but the food remained, the restaurants multiplied and finding the latest unknown taco joint became, for many of us, a welcome game and diversion in and of itself.

It is a game which I hope to use to greater purpose; specifically, I hope that by questing for great tacos, to help my sons to further inch towards alighting from the brink of the dark deep hole which has, all too often, been their lives.

And I determined that along the way we will smile and laugh. And along the way I will tell you about our adventures so that you might laugh as well…