It was my third trip out over four weeks, not that I minded the peace and quiet afforded by the trip.

I knew this land before it became the Arc of Appalachia. Ten or fifteen years ago, on a number of occasions,  I visited this rural property along Cave road, off interstate highway 50- fifteen or so miles east of Hillsboro Ohio- when I attended Zen retreats here.

At the time, the land was owned by a non-profit  which was called Highland Nature Sanctuary (HNS). HNS, in those days, was in the process of buying land in the area as they saw same as being ecologically diverse and valuable. In addition to buying the land for protection, Highland bought properties which came with the land, restored and maintained and rented them out to Sanctuary members and general nature lovers.

One of the overnight properties was the Beechcliff Lodge; a restored hunting lodge first built in 1912. The lodge has five bedrooms, each bedroom with two single beds. There are a couple more screened in bedrooms on the large rear patio as well. The lodge also has antique Shaker furniture, original wooden trim made from the now-extinct American chestnut tree and a fieldstone fireplace. 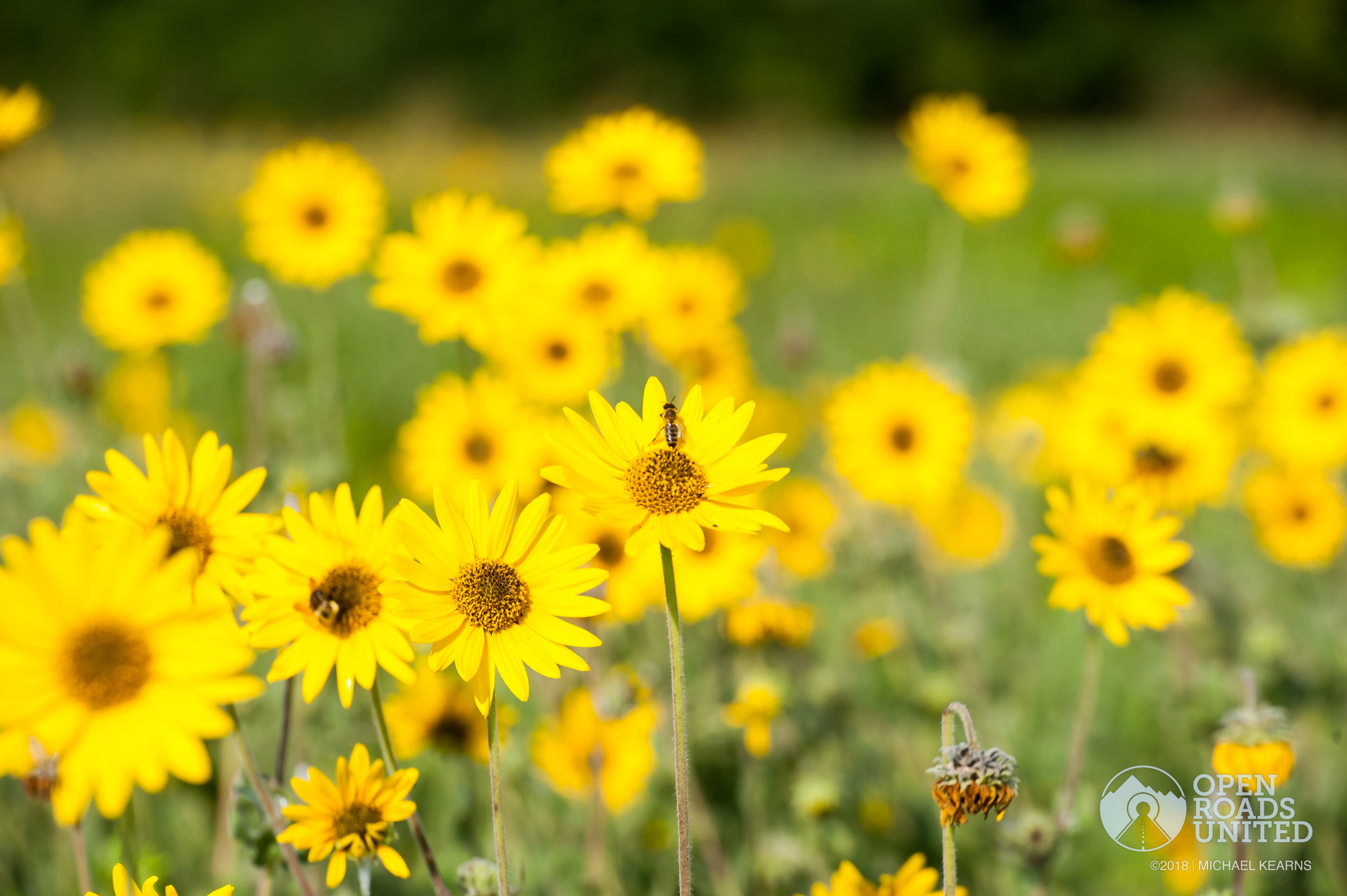 To spend a weekend there, to walk the trails around the lodge, and to hike up and down the gorge, is to experience a world which does not exist in many places these days.  Which isn’t to say that the land isn’t well appreciated. 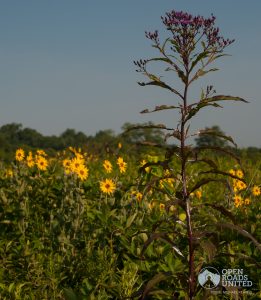 I’ve stayed many fine places across the country, and Beechcliff is among my favorite places to stay. I recall it with great fondness.

The lodge sits on the rim of a cliff directly above a the Hocking River. Inside, the Lodge is all hardwood and leather chairs.  Downstairs, there is a large dining room and kitchen as well as smaller stone porch.

In my Zen days, we’d eat downstairs, and outside, after early morning meditation. We’d eat in silence, in the dark and cold: oatmeal in the winter, granola and yogurt in warmer weather. The memory of those meals- a decade or two removed- remains clearly with me.

Every night I’ve ever stayed in the Beechcliff, I’ve sept in one of the screened in back porch bedrooms. The stars are visible through the screens, the sound of the river floats up.  In the Fall and Winter, the rooms are always cold but dry. The nocturnal sounds of the forest surround. 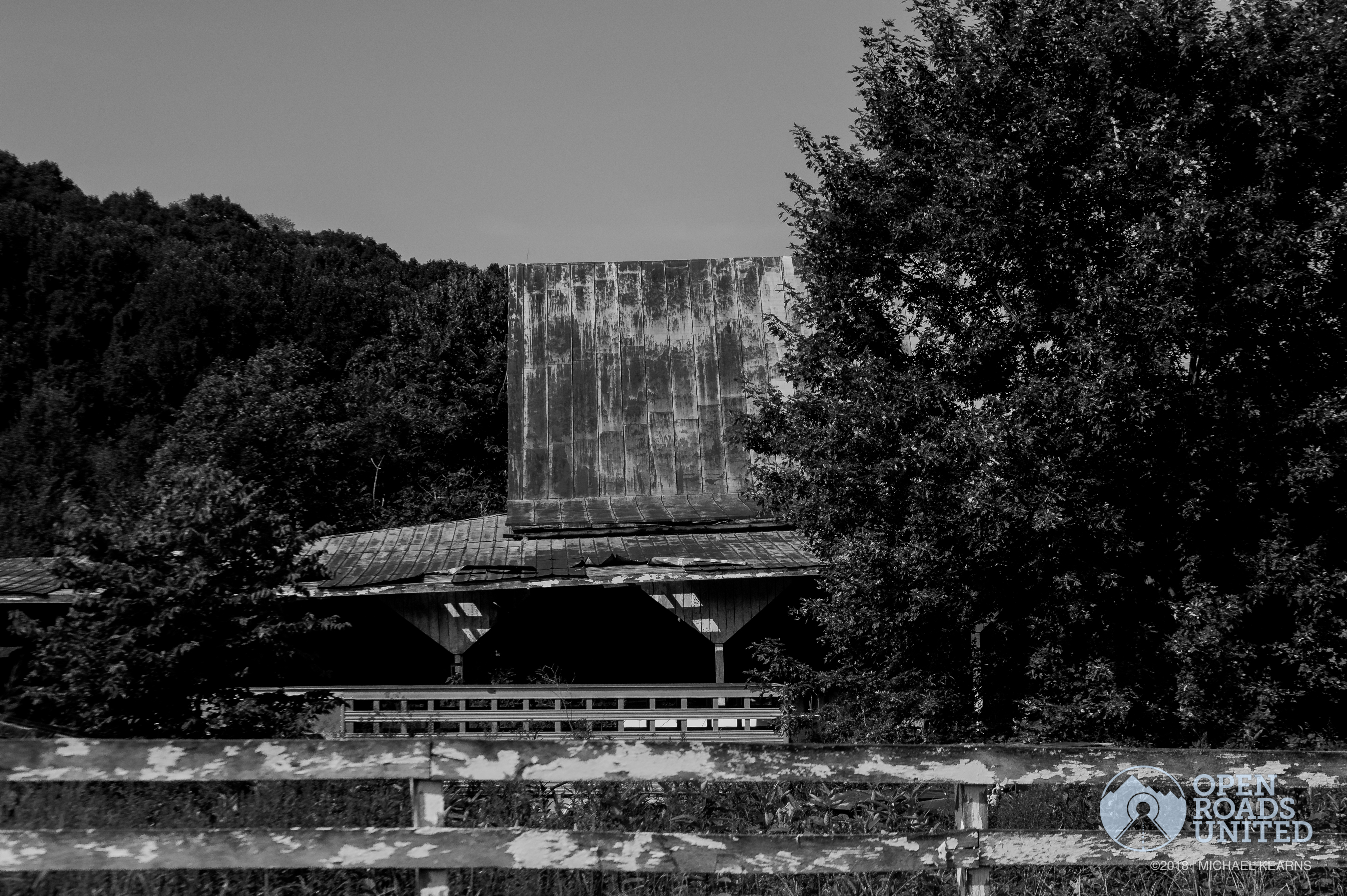 Years went by. In the interim, as told by The Arc, acquisition of lands has expanded rapidly:

Sixty acres of the 2600 acre Highlands Nature Sanctuary was once home to the 20th century nature and children’s theme park known as 7 Caves. Opening in 1930, 7 Caves was a beloved family destination for generations, reaching the peak of its popularity in the 1960’s and 1970’s, the same era that America was infatuated with family camping vacations. After the 70’s, attendance began a steep decline alongside children’s theme parks across America, reflecting a shift in our culture’s vacation preferences.

The Arc of Appalachia purchased the 7 Caves land and buildings from its owners when the business was closed in 2005, at which time the land became part of the Highlands Nature Sanctuary. Some of 7 Cave’s historic trails, with their beautiful rock work and stunning geologic vistas, still serve visitors today at the Sanctuary, along with 15 miles of additional trails. The old 7 Caves gift shop has been transformed into what is known today as the Appalachian Forest Museum. 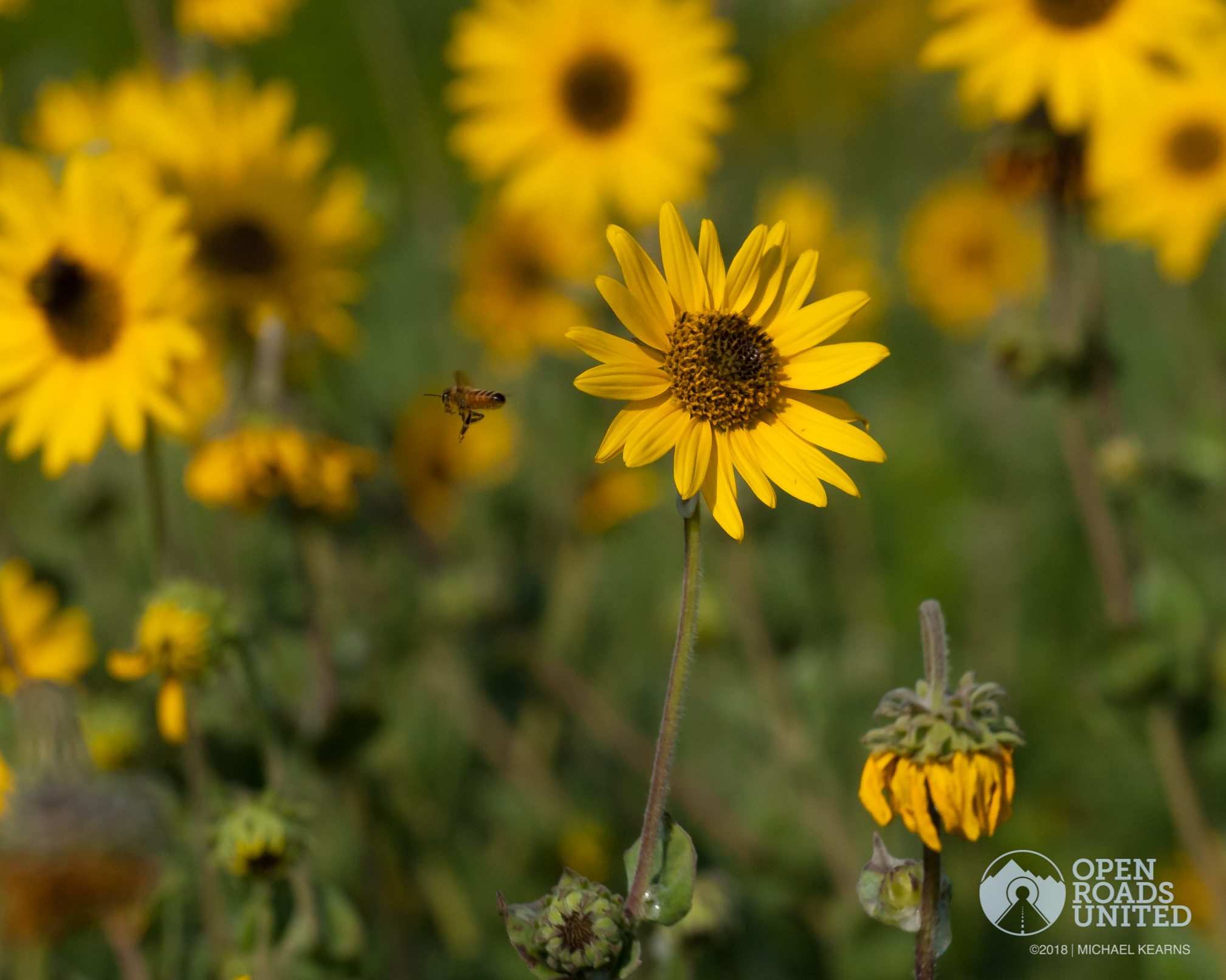 Through great dedication and hard work, the AOA has expanded to own and care take, today,  over 5618 acres spread over 18 unique Preserves . Much of the land contains rare plants and other wildlife species. 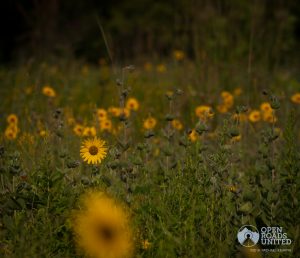 Today, the Highland Nature Sanctuary is the largest piece of the AOA wilderness quilt. Beechcliff, and a number of other properties, remain available for rent along Cave Road, as does the aforementioned museum.

The work and mission undertaken by AOA is impressive, again, in their own words:

The Arc works to accomplish forest preservation by buying forested land in key botanical “hotspots” and then slowly expanding those forests in size as funds for land procurement allow, allowing the woodlands to naturally age and diversify. In addition to forest preservation, the Arc also preserves important associated Eastern ecosystems such as wetlands and native prairies, as well as ancient American Indian earthworks. The majority of the Arc of Appalachia’s preserves lie between the Scioto and the Ohio River on the Ohio-Kentucky border. Here the forest-clad Appalachian foothills wash up like an emerald sea against the shores of the highly developed farmlands covering the Midwest, where the forest has mostly vanished. 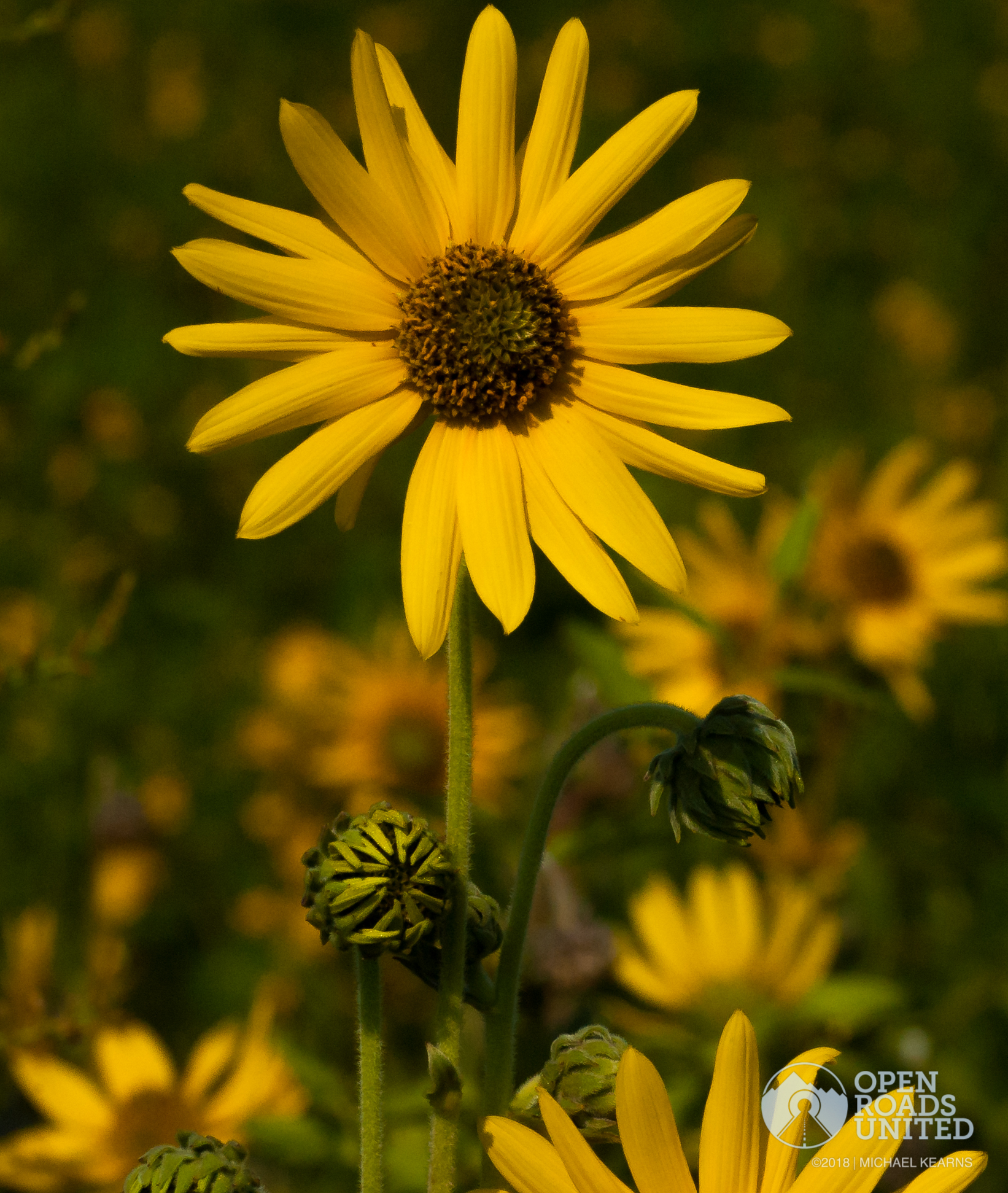 I recently had a chance to return to Highlands/AOA. Since returning,  I’ve particularly fallen in love with several of their properties. The first, and my current greatest obsession, is a large series of contiguous fields. This area is notable in that it is covered, for a brief time each August in wild 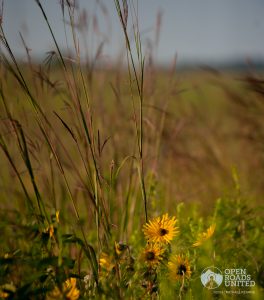 From the USDA we learn that, Ashy Sunflower “is a member of the Asteraceae, the Sunflower family. In older manuals and guides, this family is called the Compositae because the ‘flowers’ are a composite of many flowers, often of different types.”

The many species of plants in this family are grouped based on the arrangement and type of flowers. Other sources describe the flower as a, “hairy sunflower or downy sunflower, [which] is a rhizomatous perennial sunflower of the aster family…” 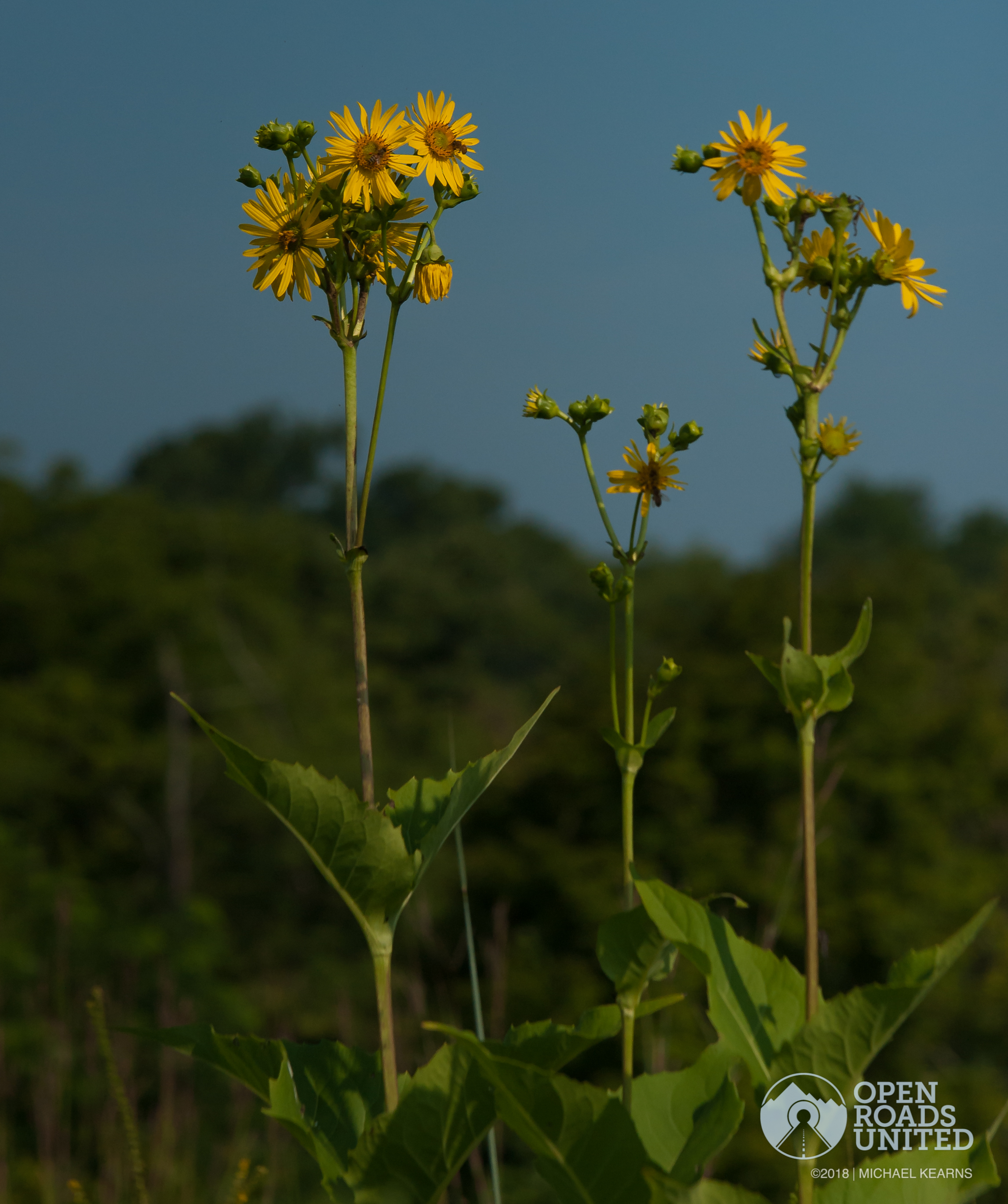 Whatever the biology, I wanted to see these fields in bloom. I envisioned the entire landscape as a canvas of green, yellows and blacks.  It would be a rare photographic opportunity given the preserve’s near proximity to the adjacent cities of Columbus and Cincinnati. 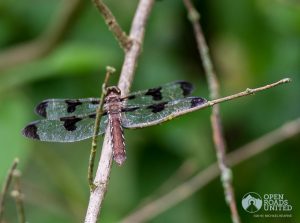 It was the kind people who run the museum, at the other end of Cave Road, who told me that these flowers bloom somewhere in early to mid-August.  Accordingly, I’ve been driving patiently out each weekend in order to explore and in the hopes of catching the countless acres in simultaneous blossom.

My patience was rewarded in a very large way this past Sunday. Arriving at 8 am, I found that the sunflowers had come to bloom in the week before and that I had the fields to myself.

I spent the morning photographing not only the sunflowers but other tall, thick, dew heavy plants and grasses as well as countless creatures that live in this very specific and beautiful ecosystem. If I had suddenly found myself adrift in space, I could not have felt more at peace nor alive in a more alien land. 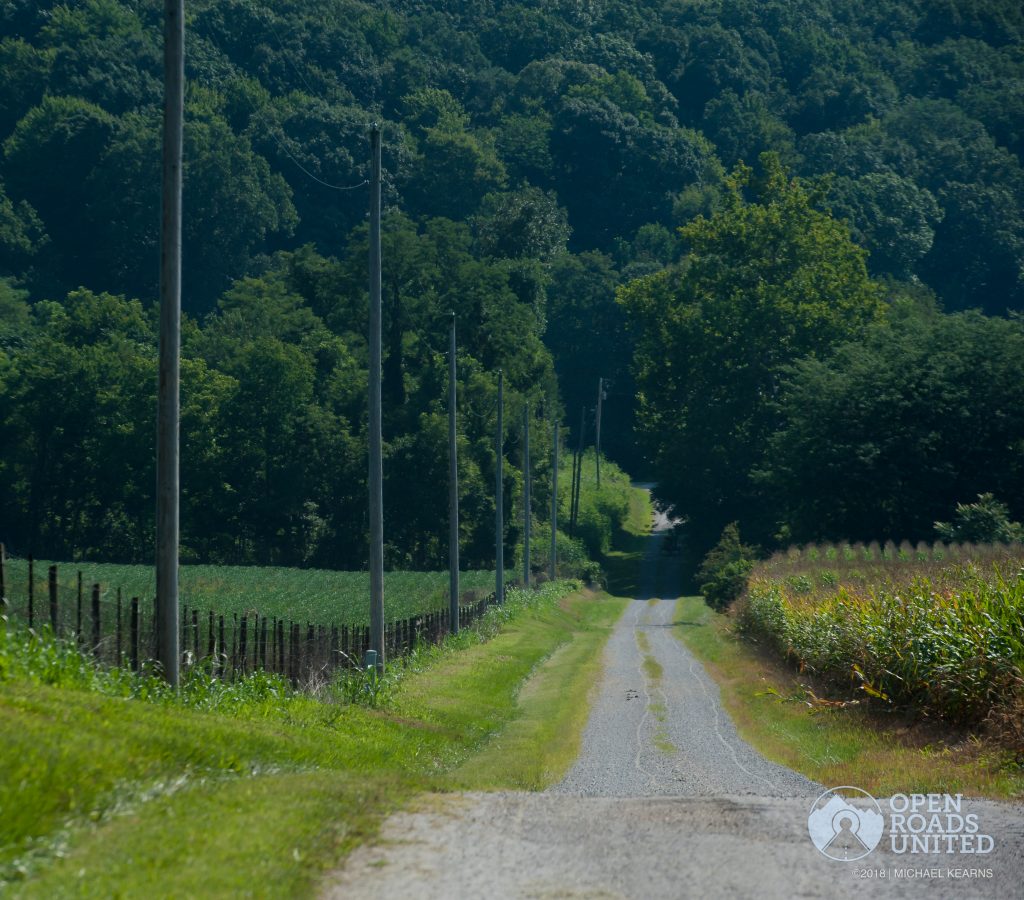 Bees, birds, a thousand kinds of insects, as well as larger animals including deer- as evidenced by their compressed grass beds- but no humans, not a single human- afforded me the luxury of feeling as though I’d been cut adrift on a strange and rich sea of life.

I shot, photographed, for a couple of hours. 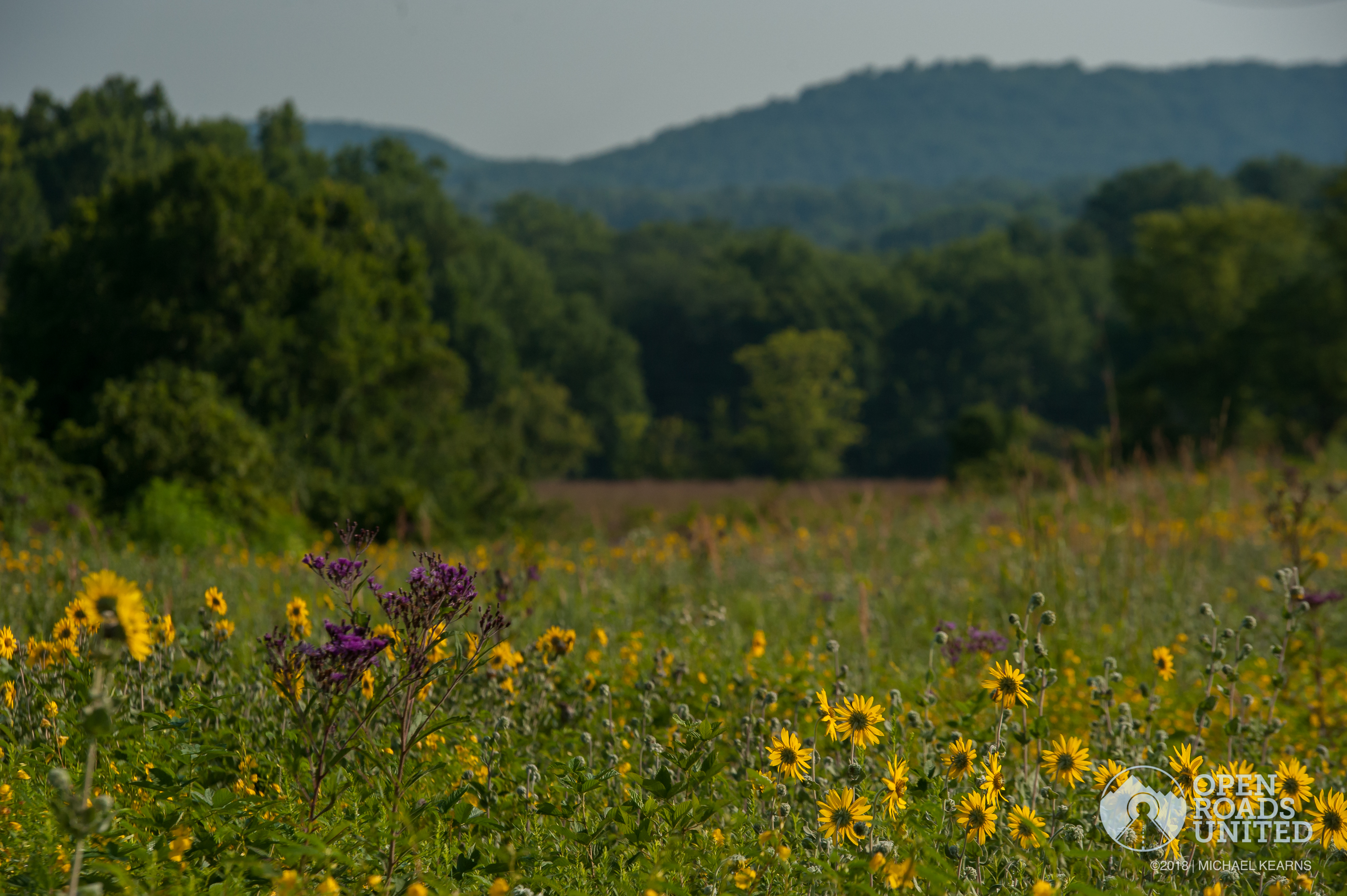 By  ten, I was soaked in sweat  and dew; and covered in countless grasses burs and seeds from the four to eight foot grasses that also growing these fields. Despite the discomfort,  I don’t know that I’ve ever received greater peace of mind in such a short amount of time. 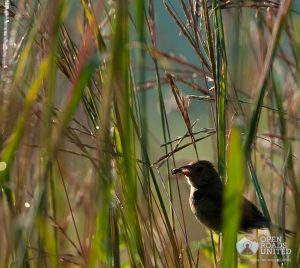 To immerse oneself completely into such a world is a rare gift. A gift I might add that you can give to yourself for thirty-five dollars a year.

There is also the peace of mind that comes with knowing that this land is privately guarded by moral stewards and that this wilderness will remain in existence, week after week and year after year.

It will wait patiently for those who come to explore its hidden worlds, while simultaneously seeking refuge from the mad men and women who so seem to delight in slashing and mining, clear cutting and strip mining our public lands.

These lands  are also beautiful, flowers aside, because they serve as a literal refuge man and beast; insect and birds alike. 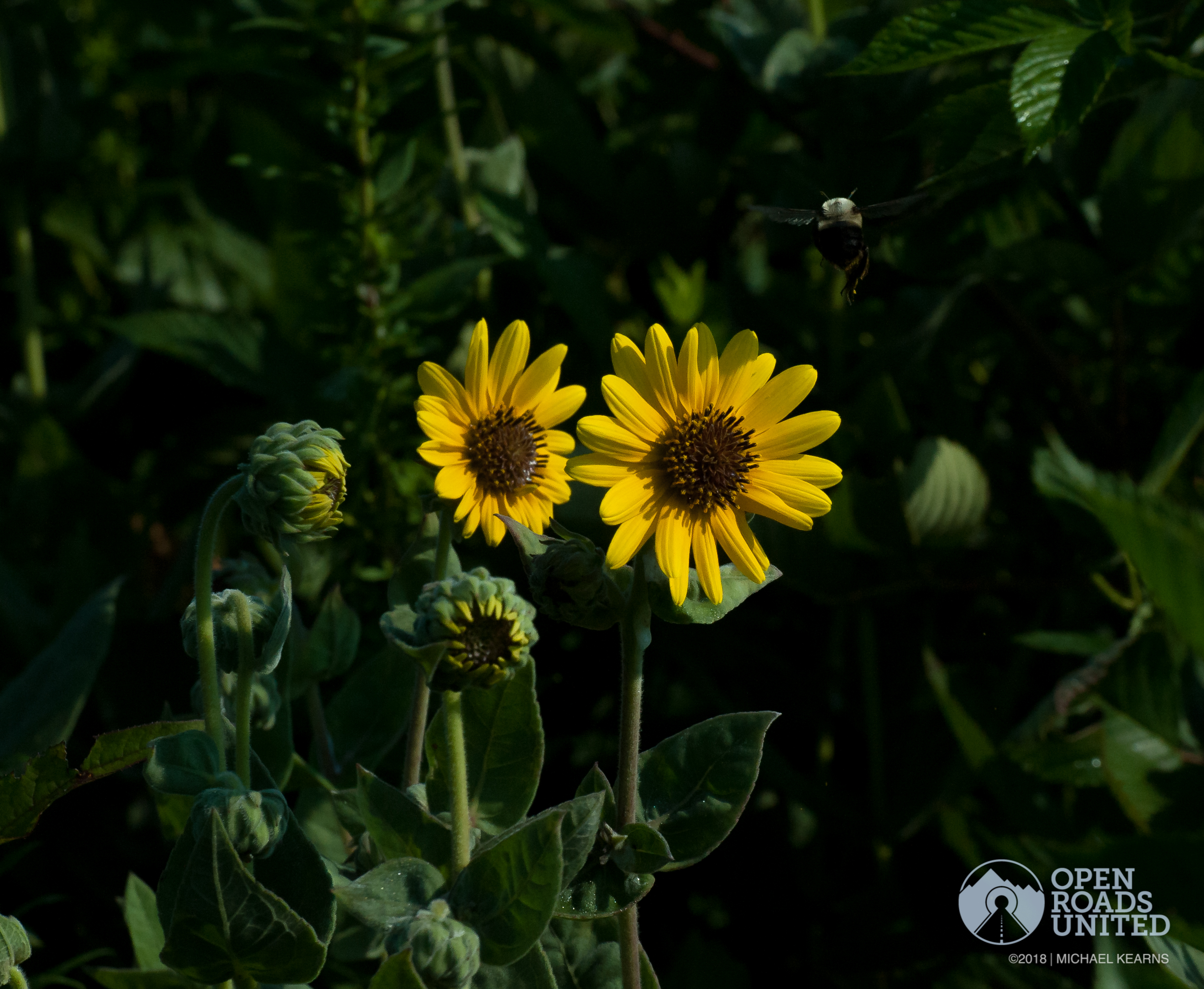 Unfortunately, these lands do seem to be waiting also for those apparently inevitable days when we will all have no choice but to join in bloody battle with those who seem to lack all humanity, aesthetic appreciation and/or morality.

I hope to be proven wrong, even though the the drums  of war beat louder each day. Until that time, we who care, those who cherish peace, will have one and other.  Until then it is our turn to cultivate, appreciate and protect.