Rob Fetters, Cincinnati music stalwart, singer songwriter and guitarist extraordinaire, has played in many places with many people.  The list of people he’s collaborated with ranges from obscure to legendary. 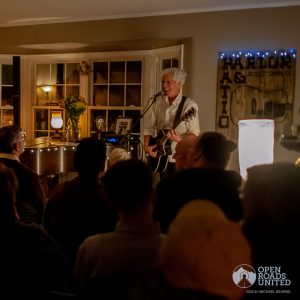 For a long time, early on, he played with the Raisins- a band filled with pith and vigor and endless catchy hooks- in a bar called Alexanders- in the now defunct Clifton Plaza. They played, for years, riotous sets every Monday night for quarter beer night; this was late seventies, early eighties-ish.

The Raisins had a very faithful following and the band played their own tunes; such classics as Fear Is Never Boring, Stella, The Bends and Your Song Is Mine.

Alexanders on Mondays was lousy with regulars, ne’er do wells and EBN dj’s (Denton Marr gets honorable mention for helping me to develop my early onset alcoholism). The band included other Cincinnati legends (bassist Bob Nyswonger, keyboardist Rick Neiheisel-now better known as Ricky Nye- and drummer Bam Powell).  They played their asses off each week; there were scrapes with stardom.

The fans adored the Raisins who reciprocated the adoration. It was, essentially, a love fest. One could argue that those shows laid the foundation for today’s local music scene. 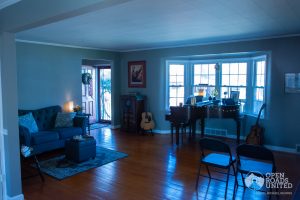 It’s a good argument- would Cincinnati have ever developed into such a musical powerhouse were it not for the Raisins, or did the Raisins simply kick-start all that followed?

I have an opinion, but I was young and very drunk in those days. My opinion is not to be trusted even if I was there every week for years.

It is fair to say, at the very least, that there have been few constant gigs- save for perhaps the Warsaw Falcons at Dollar Bill’s Saloon (And their alter egos Big Bill Pickle and the Jerkin Gerkins at Cory’s) which have generated so much outright fanaticism in the local music community, then or now. It’s equally fair to say that few players outside of David Rhodes Brown and Rob Fetters imbued the early music scene with such constant energy and quality music. 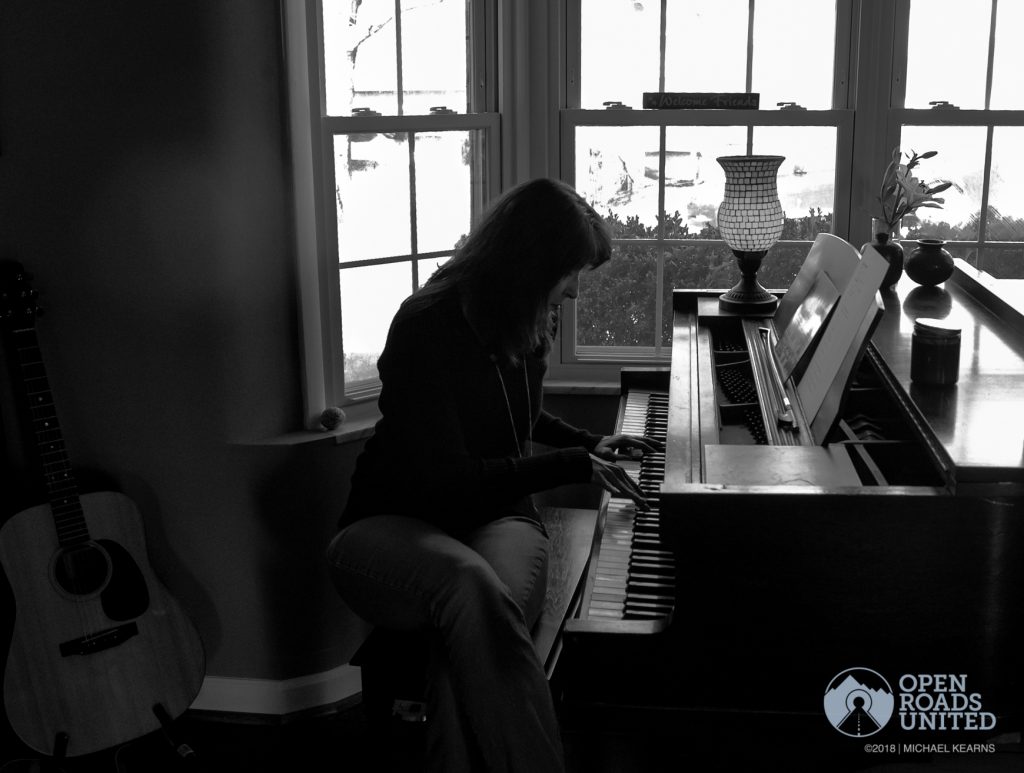 Jaqui Killen, creator of the Parlor and Patio music series.

Both of course went on after these seminal bands to greater heights. Fetters, as he succinctly recounts, in his current web site, after the Raisins:

…. formed The Bears with my childhood music mates Chris Arduser, Bob Nyswonger, and friend/mentor Adrian Belew. The critics loved us: we toured incessantly, snagged a record deal, made albums, filmed videos that got played on MTV at 4 a.m. and almost became famous. The Bears went on a decade-long hiatus and, sans Adrian, became “psychodots”, recording several albums, gigging and maintaining a lovely cult following. In the 21st C. The Bears emerged from hibernation and cracked the AAA charts with more albums, a DVD, more touring. I’ve made three solo albums and played on a bunch of recordings by other artists. The ‘dots are still rockin’, too. We’ll stop when we drop

Most recently Fetters inaugurated a new concert series- The Parlor and Patio Series being held by Dave and Jacqui Killen in their Fort Thomas home. The Fetters concert represents the fruition of a long time dream for Jacqui going back to her college days when she met Dave Killen, on a blind date that Dave tried but failed to dodge. At the time  Dave was studying music engineering at The Berklee College of Music in Boston.

The blind date, despite Dave’s best efforts to ghost, did happen and morphed into a double date in Dave’s apartment with everyone sitting, drinking talking and listening to music. Since that time, Jacqui says, she’s harbored a desire to recreate that vibe: friends, great music, drinks in an intimate setting. 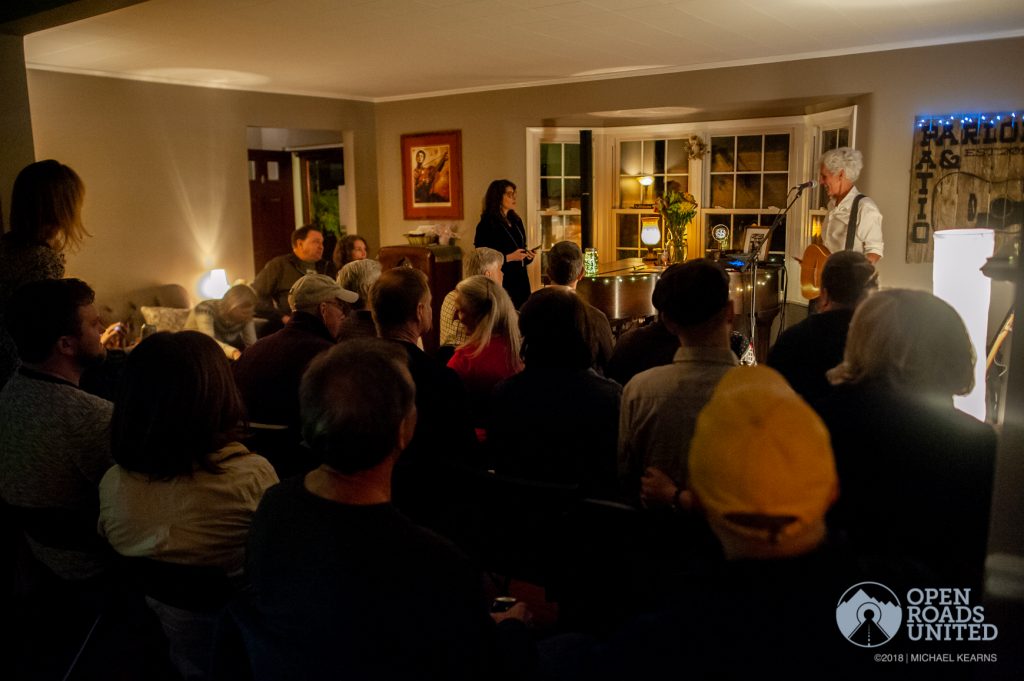 When a home renovation and her son leaving for Morehead State led to a new, open floor plan she saw the opportunity and seized it. The Parlor and Patio Music Series was born. “We love music and we love inviting people over. Why not combine the two?” reasons Jaqui.

Especially since the timing was auspicious. As Fetters writes, “I’ve spent the last year creating a living room show. I’m performing material I wrote for The Raisins, The Bears, Psychodots, my solo albums – and debuting new songs as they come along.” 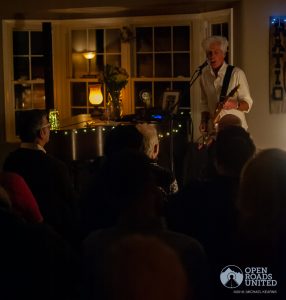 The first Parlor and Patio show ratified everyone’s instincts. The show was, in many ways, not only entertaining but enlightening. At 64, Fetters is still at the top of his game. As he did nearly forty years ago, he segue-ways easily between earnestness and angst, humor and poignancy. His playing is clean and, when it needs to be, powerful and fast.

But more than anything, Fetters has over decades of playing, in and out of the studio, and on and off stage, honed the art of holding an audience in his hand. To play a small room, in this day  and age of limited attention spans, for several hours, while maintaining everyone’s complete attention and appreciation is no small matter.

Throughout those two plus hours, Fetters not only sang and played well, but he told the story of his life and his career, punctuating that history with jokes, songs from all his past projects and self deprecating humor.

There are few artists who can look back over the course of their entire career and  mold that history into a meaningful and intelligent narrative, transcending mere musical entertainment. 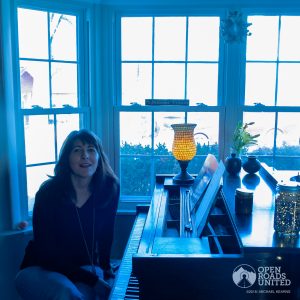 Fetters like Dave Alvin, Springsteen and Richard Thompson is not only a gifted writer, guitarist and story teller, he is a true showman, an artist capable of  concurrently inspiring audience and fellow artists alike.  He’s a musician’s musician who can still play a show without losing the casual audience.

Fetters spun stories rooted in the history of his work and spoke of the many talented people he’s worked with over the years, including Zappa, Belew and countless others. It was an entertaining well paced show that never drug. My only regret was having to leave before the end.

The quality of the show was augmented by the fact that most in the crowd were friends and that most knew Fetters, some having worked with him for decades. 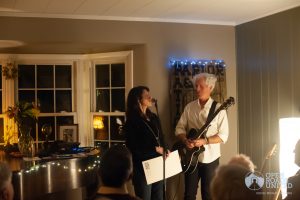 This familiar atmosphere created a friendly festive environment making the evening all that much more enjoyable. For true music lovers, the show was also a great treat in that, for once, a listening room was just that. The acoustics were perfect and the audience respectable. In creating her vision of a house concert series, Jacqui has covered all the basis and no one in attendance wanted for anything.

One felt lucky, if not entitled to see such a great show under such circumstances. The series- which continues in February with local singer songwriter, artist and photographer Justin Lynch- will undoubtedly prove to be a sorely needed exercise in community, a welcome escape for the screaming and hatred which has become today’s norm.

Jacqui  in discussing her intentions in starting this new series, recently wrote:

For us, music has always been more than background ambiance. It’s an experience we crave and cherish. We also believe it connects people in ways that are meaningful and universal. Through Parlor & Patio, we hope to foster some new experiences and connections by bringing friends, community and traveling artists together in a listening room environment.

If the Fetters’ show was any indication, the Killens are well on their way to realizing Jacqui’s dream.