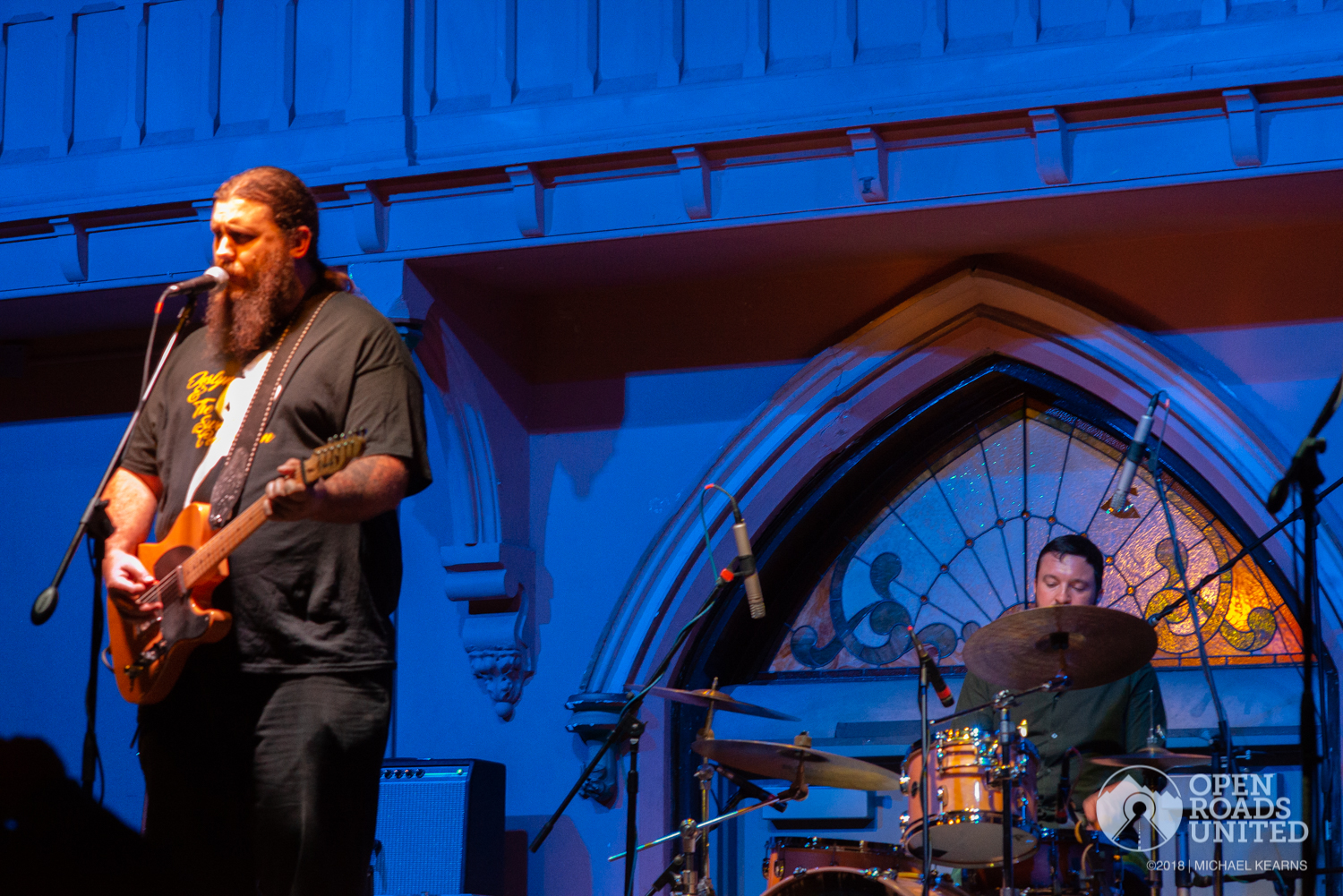 Justin Wells is thirty-six year old singer songwriter who was born in Bossier City La, though he now calls Lexington home. Justin Wells has a voice capable of stopping  traffic, or, at the very least, he’s able to stop listeners dead in their tracks. It happened to me when I first heard him, out of the blue, out of nowhere, unprepared and unawares. At the time I was backstage at a small festival, out of view of the stage.  I simply heard a voice, a roar, descend upon the earth.

The voice came out of nowhere, seemingly from the sky, large and raw; causing me to involuntarily decide that Waylon Jennings had come back from the grave. Not in any derivative sense, but in the sense of a rare gift, a rare sound, come back to life.

Going forward, in view of the stage, I found that Justin Wells is also as big as a grizzly bear- and a good size griz at that. Deep into his set, he calls Arlo McKinley on stage. They’re singing a double, shoulder to shoulder in front of the mike. Most days Arlo in the largest man on stage. Standing in the grasp of Wells he looks small; each belting out their hearts, their faces red. 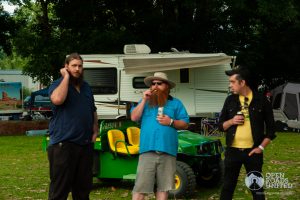 My first thoughts were that Wells must be a Nashville creation. He sounds as if he’s been built from scratch, built to serve as the new Nashville savior, one of the new soldiers sent to reclaim the old sound. A man meant to reclaim the music of Waylon and Johnny and for that matter, Sturgill Simpson. But the truth is not so simple.

For starters, Wells- a self described weird kid from a small Kentucky town; (his journey has taken home from Southern Louisiana to Texas to Cynthiana Kentucky to Lexington) has no real interest in picking a side in the omnipresent Nashville civil war. Speaking after his set, Wells noted, “I find the whole Nashville debate to be a bit silly, Nashville is an easy target, it’s as cliche to beat up on Nashville as it is to be for Nashville.”

Wells sports a blond telecaster with an outlaw look; complete with dark untamed long hair and beard. He’s got a voice and songs which are all Appalachian mountains, pick ups and hound dogs, and not a bit of it contrived or forced. Which isn’t to say that he entirely appreciates the Outlaw tag so often applied to him. “that’s not me.” he says simply. 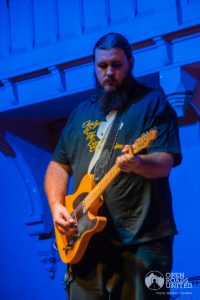 In fact, Wells’ love of country is a relatively recent thing. He notes that he had no love for country in high school given that most of his graduating class were future farmers enamored with Garth Brooks. He says he grew up, “hating country by association.”

Which is a strange thing as his delivery is as sincere as Jeremy Pinnell, which is to say effortless. His songs, like the very best, most true country songs, are simultaneously filled with anguish and simplicity and heart.

Listen, for instance to Still No Rain from his 2016 effort Little Darlins in which Wells crafts an analogy between drought and the desolation of loss of love and hope There is a small town in a southern state/ Where folks go when they’re tryin’ to get away/ Where there is no one around you to hear your heart break/ When you’re lonely.

He’s not, obviously the first to till this row, but he plows the land well, in his own clear and honest fashion and, in the end, raises a field of heartbreak known to most. It’s been so long now since we’ve seen a drop of rain/ And our heads hang low, we’re just lookin’ for someone to blame..

In Museum of Americana, Wells says of Still, “From simply a writer’s perspective, I wanted to show both the idea of a “good guy” and the concept of justice are absolutely not absolute, and at worst can cause a chain of events that are heavier than whatever perceived slight started the whole thing.“

In Dogs, Wells contemplates lost love from the perspective of the road musician.  About Dogs, which was named Saving Country Music’s Song of the Year for 2016, Well’s sings, Now the parkin’ lot is an ol’ ghost town/ No evidence anyone has ever been around/ ‘Cept a handful of gravel and a half pint of somethin’ mean/ So I’ll retreat somewhere and cover my wounds/ And pray to God that the checkout’s noon/ If there’s any luck left, it’ll be at least halfway clean

In contemplating Wells’ efforts on Dog, Saving Country Music Wrote: ”this song is not just about losing. It’s also about the unrelenting spirit inside us all that despite all the adversity, keeps us churning forward, fighting, and holding on to our pride and individuality no matter how much life kicks us in the teeth.”

If Wells were just a man fronting a classic country band- which he does, two guitars, a bass and drums with a peddle steal, a band which pure and clean; he and his band would still be noteworthy, but arguably a whole lot less interesting.

The reality is, however, that Well’s path to the present is interesting and has been anything but a straight sun baked two lane highway; his is a sound which has been a long time in evolving. 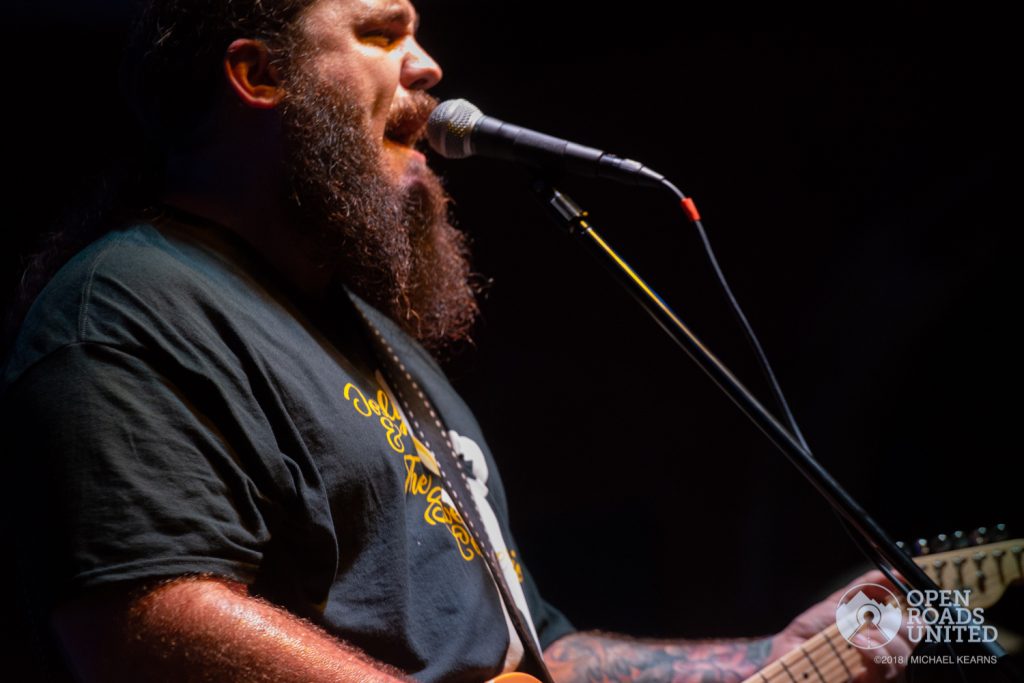 He grew up, for instance, listening to his father’s George Jones and Hank William Sr albums, as well as his Dire Strait’s, Tom Petty, Diana Ross and Al Green recordings. Which accounts for the presence of Dire Straight’s So Far Away from You on Dawn. The listener can decide for themselves whether this cover is successful, everyone, however, can agree it’s unique.

His broad appreciation for musical genres remains evident today. His opening act at the Southgate House is Joslyn & The Sweet Compression, a high powered Funk and Soul band out of Lexington. 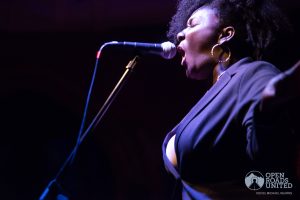 Wells started writing songs and performing in high school. In time, he found fellow Kentuckian Sturgill Simpson- while Simpson was playing guitar for Sunday Morning Valley- early on in Simpson’s career. It was this sound, among others, which put Wells squarely back on the country path.

In 2005, Wells moved to Lexington to form Fifth on the Floor, ultimately recording four albums with the band in which he served as singer/songwriter and rhythm guitarist. Fifth was a heavier, grittier band- listen to Georgia and The Floor, in which Wells and his band conjure a sound more akin to Bocephus than Jones or Cash.

The band did well. Fifth’s third disc, Ashes and Angles-peaked at 64 on the Country charts- and was produced by Shooter Jennings. Fifth released the disc & After, an EP, in Jan 2015 and subsequently disbanded.

Wells released Dawn,,his first solo disc, in August of 2016.  It was produced by Duane Lundy, whose credits include work with Ringo Starr and Sturgill Simpson (Sunday Valley) as well as Joe Pug.

Presently, Wells lives with his wife and identical twin daughters in Lexington, Kentucky. Like all musicians he spends a lot of time pounding the road. You can catch him live on December 14th in Morehead Kentucky at the Rock Tap House and December 22 in Lexington at the Burl.