GMo2: a matter of evolution 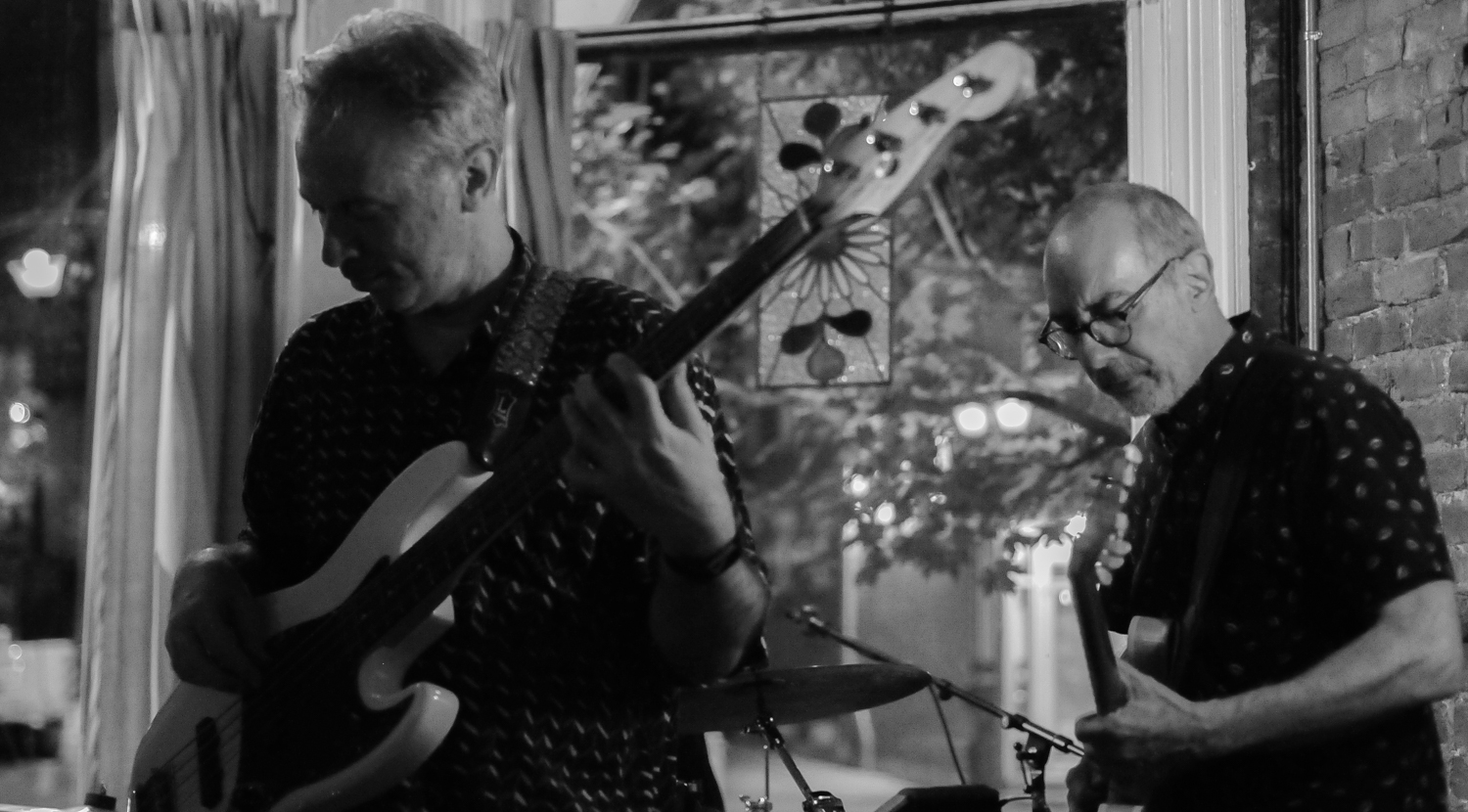 “In art there are only fast or slow developments. Essentially it is a matter of evolution, not revolution,” said composer Bela Bartok.  “Every artist must evolve from what he has been taught to what he can call his own true style,” says sculpture Hap Hagood.

Rolling Stone told one such recent story of evolution, “one Sunday night in the spring of 2014, David Bowie walked into 55 Bar, a 96-year-old jazz joint tucked away on a quiet side street in New York’s West Village. A friend, jazz bandleader Maria Schneider, had suggested he check out the night’s headliner, a quartet led by saxophonist Donny McCaslin. Bowie grabbed a table near the stage and took in a set of exploratory jazz, then left without speaking to the band. “

That fateful set led to Bowie’s last disc, Blackstar, a disc which Rolling Stone called, “an incredible fusion sound that can’t be pinned to any one genre.”  Bowie released Blackstar on 8 January 2016, his 69th birthday.  Two days after its release, Bowie died of liver cancer; his illness had not been revealed to the public until then.

The disc, which is a magical rabbit hole of influences, genres and techniques was a hit. Music fans and musicians alike were simultaneously smitten with the disc and leveled by Bowie’s death. Among those affected by Bowie’s death was local musician David Purcell.

Purcell, in fact, was sufficiently smitten that he journeyed to NYC in December 2016 to catch McCaslin & his band at the legendary Village Vanguard. This journey to Mecca triggered in Purcell a deep renaissance.  In time he put on hiatus his long time powerhouse Americana unit, Pike 27, in which he had served, for nearly its entire run as writer, lead vocalist and rhythm guitarist.

Purcell was, in fact, so taken with what he was hearing that gears began to turn in his brain. As Pike entered what was to be its final iteration, he hired a new front man and took over drumming duties. Drums were Purcell’s first musical love and the change buoyed him. He began listening to music which pushed him in a entirely new direction from Americana. He came to realize it was time for a change.

In sharing his thoughts about these changes, with friends last fall, Purcell wrote: “what I’ll say publicly is that I’m burned out by the Pike material and want to do something different.” This was no small shift given that Pike had been, for a long time a passionate venture for Purcell. Purcell, was certain, however that he wanted something different.

And true to his desires, he disbanded Pike 27 and created in its place, Ghost man on Second (GMo2). 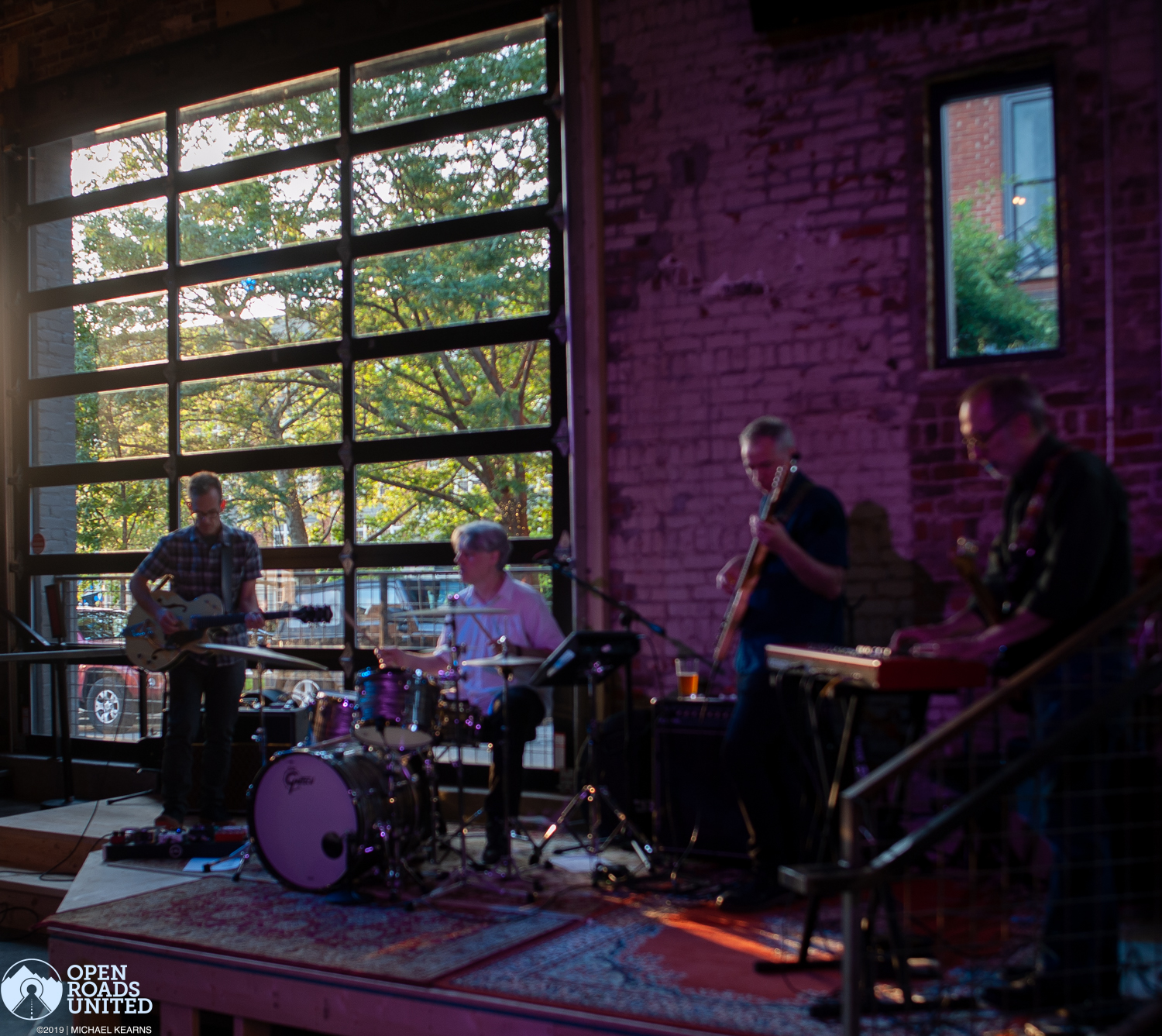 The players, in forming GMo2, largely reprieve their prior musical chores, with the very notable exception of Purcell. Gone are the need for any vocals, as this is a completely instrumental effort. Purcell, accordingly, abandons front man duties all together in GMO2, while embracing full time drumming duties.

With the tagline “soundtracks for the movies in your head,” GMo2 couldn’t be any further from Pike 27.  The project seems a breathtaking hard left for a Newport kid who’s spent damn near every musical moment of the last twenty years with a pen and notebook in one hand and a Martin in the other.

So how did Purcell, et al., get from there to here?

It turns out the change in direction wasn’t so violent after all, but was, rather, an organic series of conversations and discoveries. In some ways, says Purcell, the entire process was serendipitous, saying, “Andy was our neighbor in Northside, but we never …spoke much. I ran into him … one night, and mentioned … I was thinking of putting together an instrumental project channeling stuff like Bill Frisell and Pell Mell. He replied how much he loved that stuff, so we … and started chatting. Without that conversation, the band wouldn’t exist.”

Hittle has a similar recollection of the band’s genesis, “I can’t remember how it originally came about, but Dave and I talked about putting together a vibey project of instrumental music. I think there was a mutual appreciation there. And then we started throwing out favorite artists like Bill Frissell, Los Lobos, and Daniel Lanois’ productions and knew that we had similar inclinations and reference points.”

Mike Fair concurs, “Dave had floated the idea of a couple of concepts for an all instrumental band before Pike went on hiatus.  One idea was to do covers of existing songs – with the only criterion being it had to be groovy. The other idea was to start from the ground up and play primarily original compositions borrowing from the groove ideas of The Police, Los Lobos and some of our favorite post-rock and ambient artists…”

Mutual interest established, Hittle signed on as the co-architect of the project. “At this point,” says Purcell,  “Andy’s actually brought in more song ideas than me.” In time Fair and, bassist Aaron Zlatkin joined in and practice commenced.

According to Hittle, all were simpatico early on, “Dave knew Mike and Aaron already, so after a couple practices of throwing ideas around, we knew we all spoke the same language. They’re all tremendous musicians with a deep appreciation for a wide swath of music.”

Fair concurs, “What happened pretty quickly was the band started to mesh and respect that everyone brought their own unique piece to it and we were going to build on the things we did best.”

Which didn’t mean there weren’t concerns or apprehensions.

Wherein Pike 27 was a pure Americana band in which four or five very talented players gave voice to Purcell’s stirring and timely, and often political, lyrics; GMo2 is an entirely instrumental effort channeling and morphing anything from Tom Waits, to the Beach Boy’s with nods to Los Lobos, John Coltrane and Bill Frisell as well as Calexico, Joe Strummer & The Mescaleros, Alejandro Escovedo, Ry Cooder, production by Mitchell Froom/Tchad Blake, as well as other inescapable influences (REM, Faces, Stones).

And while Cincinnatians are certainly accustomed to quality local home cooked music, it is nevertheless a rare thing to see a leader and group of genre committed musicians succeed so quickly in creating such an entirely new sound.

Notes Michael Fair, “My….real fear was that the people that were fans of Pike, Wojo, The Adventure Seekers, Alone at 3 AM wouldn’t get it at all and want us to do the type of indie-rock material that they liked in the first place. They were a whole lot more open minded than I was giving them credit for. Our first two shows were really well received and, whether they were thinking it or not, no one said, ‘man I wish you would have played The Long Fight or whatever.’”

And it is a new sound. A sound that is neither derivative or even reminiscent of anyone else locally, and one which has already and will continue to impress both long time vets and causal music listeners alike.

And what do the players think of their efforts to date, are they enjoying themselves?

Says Fair, “I love a lot about this band. …. I’ve never been with a group of any kind – not just a musical group – that’s this focused and dedicated. … We’re compulsive about making every aspect of these songs as true to the vision as possible. But at the same time, nobody is so married to the vision that they can’t change course when it serves the song.”

Adds Andy Hittle, “When I play guitar at home, I’m typically just writing little bits and bobs, not running scales. With a project like this, it’s gratifying to have a place to flesh out these little sketches. We’re all just playing in and around the kinds of music that we love – especially stuff that wouldn’t have found a spot in other bands we’ve played in.”

In speaking of the transformation, Purcell wrote in the late 2018, that “I really just want to get back to playing music and having it be joyful. And I want music to be more spontaneous again.  I don’t write jazz, but I want to have a jazz-like approach to what we do, a true musical conversation between a few guys instead of playing it like it’s on the record for the 99th time.”

And what is at the heart of GMo2?

What binds all [this] stuff together for me is rhythm and a certain kind of soul. It’s grittier and less pop than what I’ve been doing the last few years. Drumming-wise, I’m at my best and happiest when I’m in the space between Stewart Copeland and Steve Jordan, blending geography (London, reggae, New Orleans, Memphis, Afrobeat).

Ultimately, I just want to play music, have a musical conversation with my bandmates, and have it be a joyful experience… I always go back to a Pike show in Walnut Hills where Chuck Wiggins, Baba Charles, and Yvan from Lagniappe sat in — it was completely about being in the moment and having a conversation. One of my faves ever.