On the day after the government shut it’s doors, in a childish and harmful manner, and the Pope, while saying mass in Peru, declared “Violence against women ‘a plague,’” while urging people to fight violence against women in all its forms, protesters took to the street- across the globe- to demonstrate upon behalf of women’s rights.

One of the few bright spots of the dark prior year was, of course, the many women’s marches which occurred nationwide last January. One year later- and on the first anniversary of Donald Trump’s inauguration- those same peoples returned to the streets in even greater numbers.

Concerns that turnout might be reduced secondary to the regrettable differences between Black Lives Matter and those hosting today’s women’s marches, proved false as turnout was strong, loud and organized beneath bright blue skies and warming temperatures.

Women, men and children, of all ages and races, took to the street in demonstrations which occurred from Philadelphia to LA; from Cincinnati to Park City Utah. The biggest event is planned for Las Vegas on Sunday.

Turnout was estimated at 300k in Chicago. There was an estimated crowd of 15-20,000 in Cincinnati and arial views of New York City revealed a march which stretched for blocks on end.

Marches and rallies were not contained to just the United States. For as international disrespect for the both the President- and the American government as a whole- continues to grow, so do rallies and protests. Women in Rome today demonstrated in solidarity with American women by protesting and marching in the Italian capital. 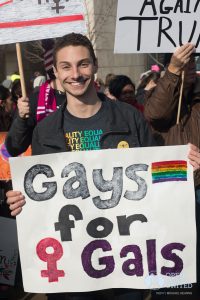 Various causes were represented by the marches. The Denver march, for instance was supported by members of the American Indian Movement, or AIM. Perhaps the single largest interest group across all marches appeared to be voter registration groups who fanned out through the crowds with clipboards. They also set up tables manned by volunteers in the hopes of registering new voters, and/or influencing specific legislation (such as gerrymandering) all of which is intended to overthrow the present administration.

Organizers said the focus this year has shifted from resistance against the Trump administration to influencing upcoming local, state and midterm elections. Whatever the cause, rallies and marches across the world, were expected to bring millions of protesters into the street.

Last year’s march “was a rallying cry for a lot of women who wanted their voices to be heard,” said Emily Patton, a spokeswoman for the Women’s March. “This year, we really want to show support for women who are running for office and to encourage more women, women of color and those in the LGBT community, to run for office, to register to vote, to be more civically engaged.”

No matter the cause, it is clear that the fury and indignation felt last year by many of the protesters has not abated given the events of the intervening year. It’s hard to believe that the next year could be any less contentious.