Christian McBride and The New Jawn 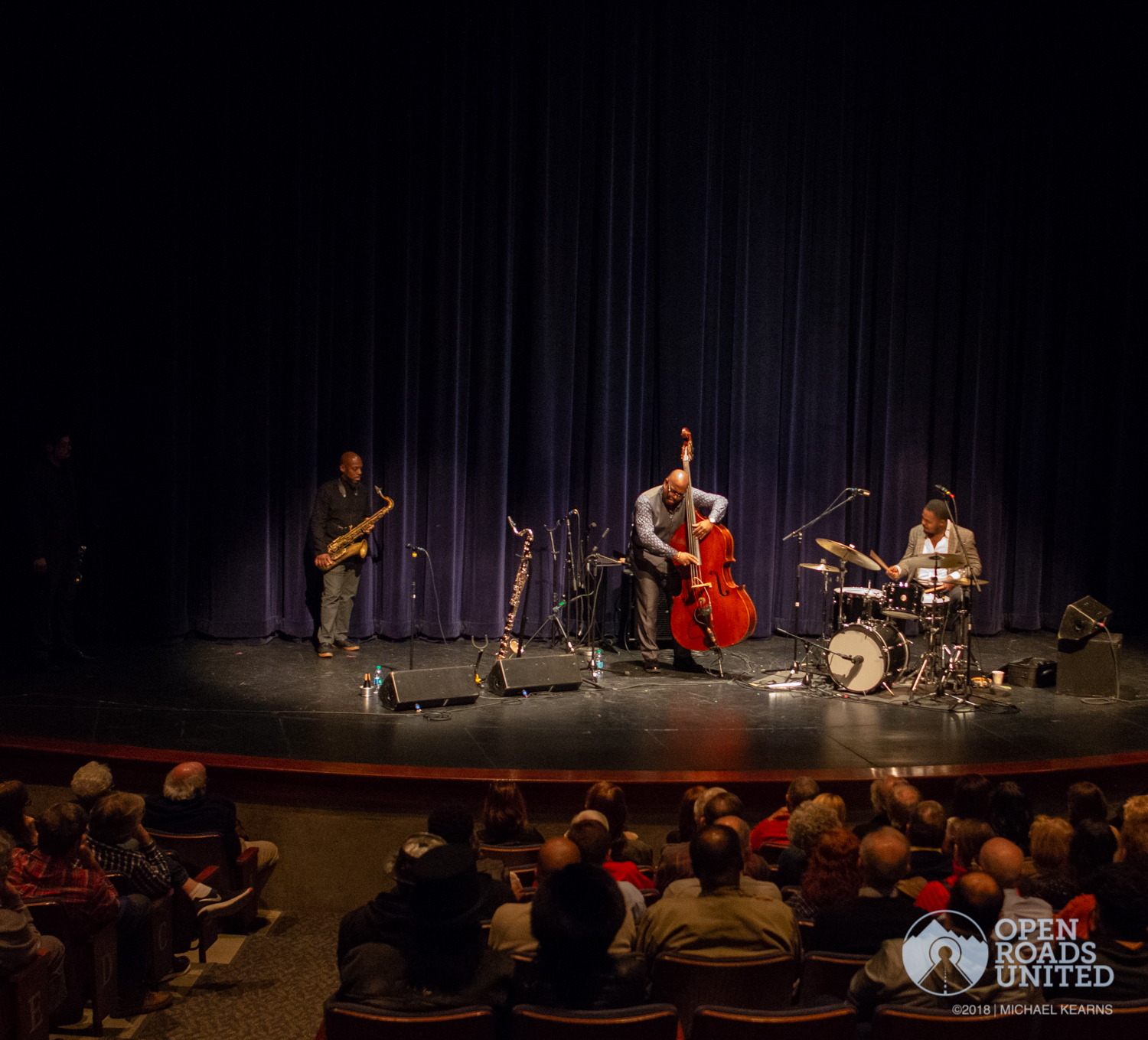 It’s a very fine thing that our city has crawled from it’s dormant cultural malaise to rapidly morph into a destination with countless art and entertainment options. 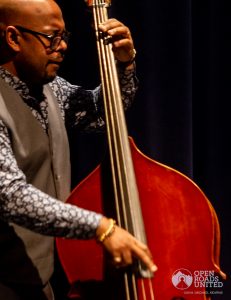 One of the unfortunate realities of that transformation, however, is that worthwhile events are in danger of getting lost in the shuffle.

Take for instance, the jazz scene in Cincinnati. Just several years ago, and despite  the presence of CCM’s world class jazz program, Cincinnati was on the verge of becoming a jazz grave yard, having virtually no single dedicated jazz club.

Today, however, there are not only multiple viable jazz clubs  such as The Greenwich, Schwartz’s Point and Cafe Vivace; there are also other venues that regularly program jazz: Northside Tavern, Stanley’s and Lydia’s on Ludlow; as well as ad hoc programs and series such as Brandon Coleman’s Golden Mean Series and his loft concerts on Eighth Street. 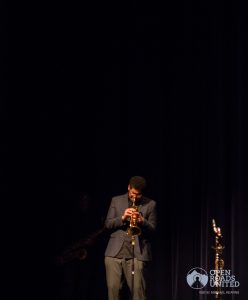 The little heralded series features some of the biggest names in jazz and the Gallagher Theater is a first rate comfortable, intimate, facility with superior acoustics which places the audience nearly on stage with the performers.

For a true jazz fan this series is as good as jazz gets, not only in Cincinnati, but anywhere.

This years series brought Christian McBride who played to a full house on 10/27/2018. Mr McBride is a bass player who spans the generations between the classic epoch of Jazz and the modern era. As such he has played with jazz legends like Sonny Rollins, Chick Corea, Herbie Hancock or Pat Metheny; accompanying pop giants like James Brown, Sting or The Roots; while also collaborating with classical masters like Kathleen Battle, Edgar Meyer or the Shanghai Quartet.

The show was phenomenal with Mr McBride covering tunes from his latest work, The New Jawn (Pier One, Brother Malcolm ) to classics (Ornette Coleman’s The Good Life), to lesser known tunes (Larry Young’s Obsequious and John Day’s John Day) as well as compositions penned by tenor Sax and Bass Clarinet player Marcus Strictland ( Seek the Source- one of the night’s great efforts) and trumpeter Josh Evans (The Ballad of Ernie Washington).

Rounding out the band was Justin Faulkner, a barrel chested large drummer who was, arguably, the highlight of the show. Faulkner played as hard and fast and as clean as any drummer as I’ve ever heard in any genre. Lest you think we’re engaging in hyperbole, catch a clip of his work here.

The other players acquitted themselves as well. McBride led the quartet ably. His playing, was appreciated alike by both true jazz fans as well as those without great love or knowledge of the bass. For novices like myself McBride performance was instructional, and at at times a revelation. 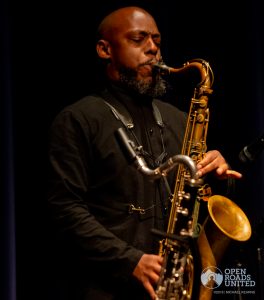 Marcus Strickland (whose past gigs include a five-year stint with the drummer Roy Haynes ) played the tenor in styles recalling a range from Coltrane’s sheets of sound to shades of soul and hip hop.

Josh Evans- who spent much of the night, literally in the shadows and appeared, at times, to be more a special guest to the trio, than a member of the quartet; nonetheless, when he did play, played well. His trumpet’s voice rising high and clear, sounding more of Booker Little than Miles.

But it was Justin Faulker who stole the show. Faulkner, who’s first gig was road drummer for Branford Marsalis after graduating from Berklee College Of Music is, like Mr McBride himself, a West Philly native (the word Jawn found in the title of McBride’s latest work is Philadelphia slang for anything … literally anything, “an all encompassing substitute for any person, place, or thing, ie a thingamajig).

Faulkner set the tone for the night, driving the quartet through a memorable hour and a half set. There were times in which McBride stood by his kit, smiling, seemingly as amazed and amused by Faulkner’s playing as any audience member. 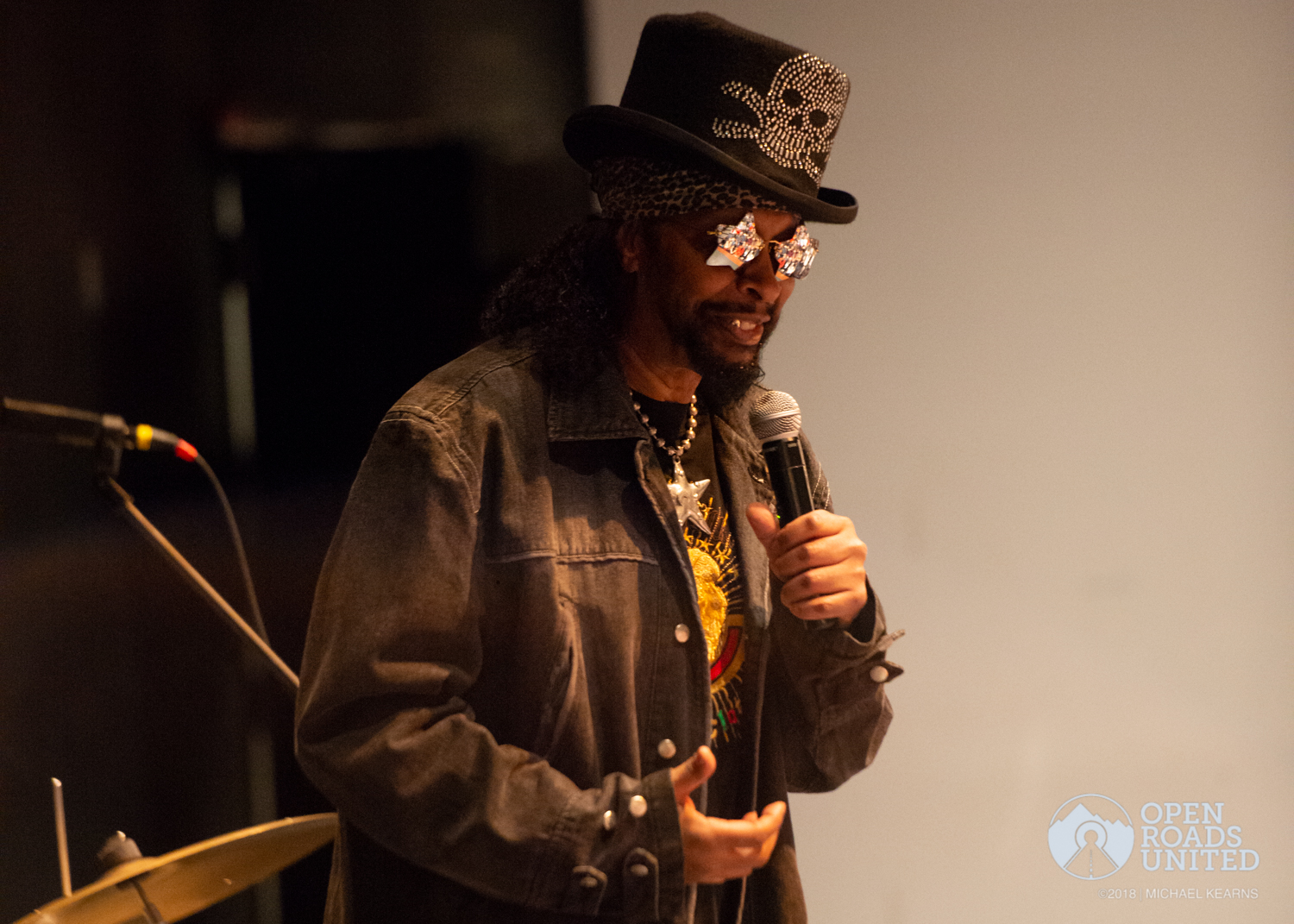 The admiration was obviously mutual with McBride calling out Collins during the show, and stating that, “everything I do with these hands is informed by Bootsy’s playing…He was my first bass hero, outside of my father.”

In a short interview after the show Collins called McBride, “a beast on bass,” explaining that, “when I was first learning to play the upright bass- the same music that he plays today- I felt like the bass was playing me, but he (McBride) moves up and down with such ease.. I admire anyone who can play that large piece of wood with such control.” 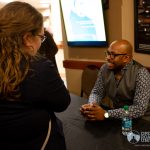 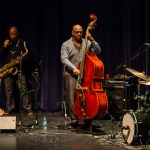 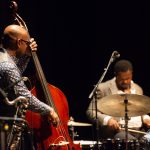 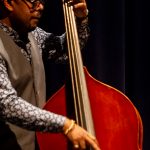 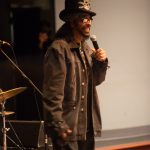 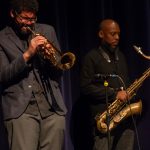 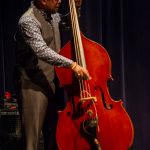